Dynamics of Laser-Induced Cavitation Bubble near Rigid and Flexible Boundaries

Cavitation is understood as the pressure-driven growth and collapse of vapour bubbles in a liquid flow. It is mostly known for its negative effects on the operation and performance of marine propellers and rudders as well as hydraulic machinery components such as pumps and turbines. Cavitation can cause mechanical damage, so-called erosion, on surfaces of the affected components. The collapse dynamics of a cavitation bubble near a solid surface are one of the important topics in turbomachinery and marine engineering which were investigated by different researchers. Cavitation-induced erosion involves complex mechanisms and consists of different phases. In many cases, a reverse flow, called re-entrant jet, is responsible for shedding cavitation structures from a solid surface. These types of cavitation are often referred to as cloud cavitation. Further downstream, in regions of higher fluid pressure, these structures can collapse and radiate shock waves of high pressure amplitudes.

The shock waves, radiated by large-scale cavitation collapses, can activate collapses of wall-adjacent single bubbles, which are able to damage a solid surface. Figure 1 sketches a typical example of cloud cavitation dynamics on a hydrofoil. Therein, shock waves emitted by the cloud cavitation collapse lead to collapses of single bubbles close to the trailing edge of the hydrofoil. These single bubbles are able to cause surface damage either by generating a high velocity liquid jet pointing towards the material surface – the microjet – or by radiating high amplitude pressure waves themselves. Figure 2 sketches the collapse of a single bubble close to a rigid wall on a cross-section through the centre of the bubble. Flow velocity vectors are depicted as arrows around the bubble. In Fig. 2 (a) the bubble is shown at its maximum radius, Rmax. The pressure in the bubble has decreased fairly below the liquid pressure around it, resulting in compression of the bubble. The surrounding liquid therefore flows towards the bubble from all directions. Because the flow from the bottom is disturbed by the solid wall, more liquid flows from the top towards the bubble. As a result, the bubble moves slightly towards the rigid wall and is asymmetrically compressed (see Fig. 2 (b)and (c)). The bubble asymmetry progresses and a high velocity microjet develops, flowing through the bubble (see Fig. 2 (c)). Finally, the microjet pierces the bubble and hits the sheet of liquid between bubble and solid wall, which is at rest (see Fig. 2 (d)). Depending on the velocity of the microjet, this rapid deceleration can result in the formation of a shock wave of high pressure. As shown in Fig. 2 (e), the bubble forms a vapour torus, which is further compressed. Accordingly, the microjet flows towards the rigid wall and is decelerated to zero, leading to a second potential shock wave formation. Both positions of deceleration of the microjet present potential water hammer impacts. Fig. 2 (f) depicts the collapse of the torus, forming complex shock waves which can interact with each other in the original bubble centre, at the solid wall, and above the bubble, away from the solid wall. Depending on the normalised wall distance of the bubble, the shock waves can superpose to generate high pressures to damage the rigid boundary. Furthermore, tension phases of the shock waves can superpose and generate new cavities in the water as a secondary cavitation, so-called rebounds, that have a damaging potential as well.

Most of the previous studies are mostly focused on the dynamics of the single bubbles without the solid surface and with a planer rigid boundary, but the literature lacks studies dealing with a single bubble dynamics near different rigid and flexible boundaries. In this regard, gathering detailed experimental data is an important issue to control the collapse of cavitation bubbles near different solid and flexible surfaces in marine engineering and hydraulic equipments. Therefore, the aim of this project is to investigate the effects of different rigid and flexible boundaries on the dynamics of a laser-induced cavitation bubble. 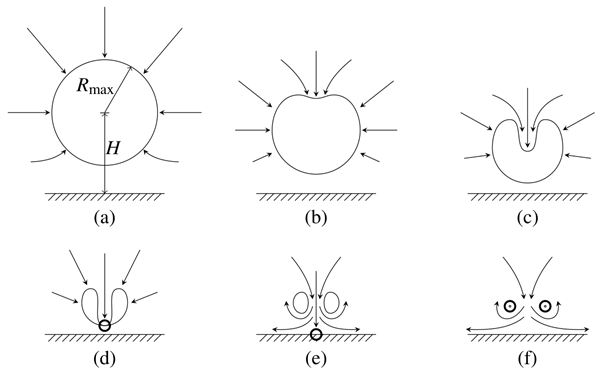 Fig. 2: Collapse of a single cavitation bubble near a solid wall. a) Single bubble at maximum size at the beginning of a collapse. b) Formation of asymmetric bubble shape. c) Generation of a microjet that pierces the bubble. d) Microjet has pierced bubble and hits liquid at rest between bubble and solid surface. e) Microjet generates shock impact at solid surface and forms toroidal bubble shape. Liquid flows radially outwards along solid surface. f) Collapse of toroidal bubble to generate further shock waves.
​​​ 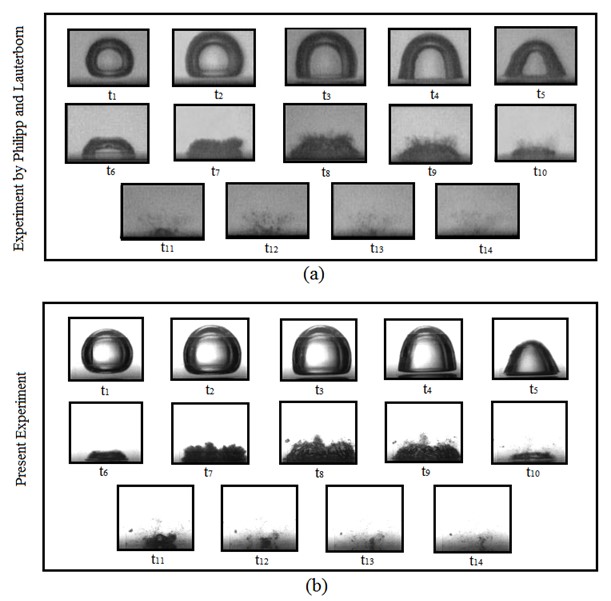