The prediction and evaluation of the maneuverability of inland vessels is nowadays becoming increasingly important. External influences such as climate, economy, reconstruction of the waterways and increasing traffic volumes demand new methods and safety standards to be able to react to them.

The Federal Waterways Engineering and Research Institute (BAW) already has a dynamic route analysis and optimization model and an inland navigation simulator (Figure 1) with which it is possible to simulate the trajectories and movements of an inland vessel. The stored mathematical models represent the movements coupled in 3 degrees of freedom and decoupled in 6 degrees of freedom.

One objective of this project is the further development of a mathematical model for the simulation of the movement of inland vessels during maneuvering processes coupled in all six degrees of freedom, taking into account sloshing, water flow, machine dynamics and shallow water influences. The maneuvering model to be developed shall be based on a direct system identification (model according to Abkowitz with Taylor series development (1964)). It shall also be multi-level to serve different accuracy requirements. For example, the first stage of the model requires only the determination of the static hydrodynamic coefficients (depending only on drift angle and rotation rate). Effects of sloshing on tankers, water flow, and engine dynamics are accounted for using simplified models (regression). Mixed terms and higher order terms are not considered. The highest level of the mathematical model considers terms (single and mixed) up to the fifth order. The above physical effects (sloshing, water flow, etc.) are modeled by additional terms on the right-hand side of the equations of motion, which are directly calculated (CFD) and measured. Due to the multilevel model, the effort for the determination of the hydrodynamic coefficients can be adapted to the required accuracy. 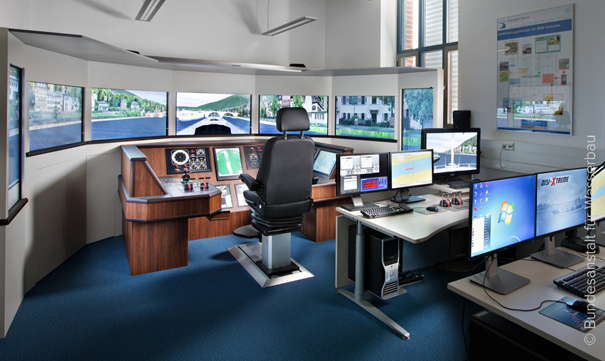 ​Sponsored by the Federal Waterways Engineering and Research Institute​