Vortex induced vibration (VIV), the flow around bluff bodies, which may induce substantial structure vibration, comes under a more general category of the fluid structure interaction (FSI) problems. In marine engineering, VIV has many applications such as offshore risers, offshore wind turbine, etc. Resonant conditions may occur if the frequency of the shed vortices matches a natural frequency of the structure. At resonance, oscillation in the transverse direction to the flow may affect the structural integrity and its fatigue life, or damage it. Consequently, VIV is a well-known and extensively investigated phenomenon. However, it is still not understood completely. In this research project the VIV for different circular cylinders are investigated experimentally and numerically.

An experimental investigations of VIV of a partially and a fully submerged monopile structure in model scale is made in the circulation water channel of the university of Duisburg-Essen. The structure and the fluid flow characteristics are measured simultaneously in the experiments. A Digital Image Correlation (DIC) method was used to measure structure response, results obtained by the DIC method are compared with the measurements of a triaxial . A Laser Doppler anemometer (LDV) system was used to measure the vortex shedding frequencies and the velocities of the inlet flow. An accelerometer and a load cell were used to measure the structure vibration and the load due to fluid flow. A Particle image Velocimetry (PIV) system was used to measure the fluid flow characteristics and visualize the wakes and eddies behind the different cylinder oscillations. All the experimental setups are shown in figure 1. Figure 2 shows some results from our experiment at U = 1.8 m/s, corresponding to reduced velocity, Ur = 5.832, corresponding to Re = 56520).

Two function objects were implemented into OpenFoam, an opensource C++ library for CFD,  able to compute fluid structure interaction for 2D-circular cylinder oscillate in one and two degrees of freedom. The function object was coupled with an incompressible flow solver, which is able to compute laminar flows as well as turbulent flows. Applying this function object, we investigated the fluid structure interaction of a low mass ration cylinder (the ratio between the mass and the displaced fluid). In addition,  the OpenFOAM-FSI solver was used to solve 3D-circular cylinder oscillate in two degrees of freedom. The solver is based completely on the finite volume method, and both the fluid and solid were solved in the same solver based on the arbitrary Lagrangian-Eulerian (ALE) mapping equations approach. The results are compared to the experimental results and with another commercial software ‘Star-CCM+’ 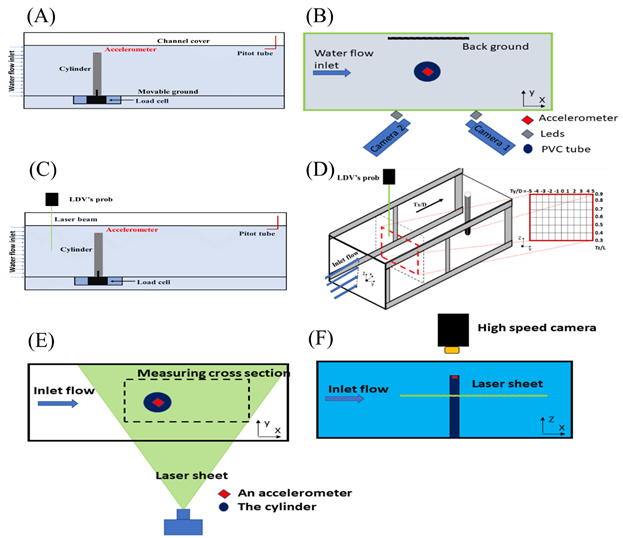 Figure 1. Different VIV experiment setups, where (a) Side view of the circulating water channel with fully submerged circular cylinder and its equipment, (b) Top view of the water channel with the cylinder with the DIC system setup, (C) Side view of the cylinder with the LDV system, (D) Schematic presentation of the circulating water tank showing the position of the vertical grid plane where flow velocities were measured, (E) Schematic presentation of top view of the experimental set-up for PIV measurements and (F) the side view.
​​ 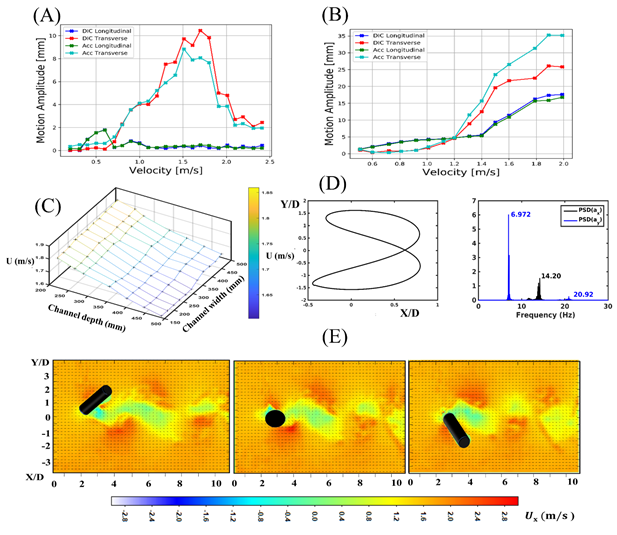 Figure 2. Median motion amplitude in dependence of the flow velocity for DIC method and accelerometer where (a) partial submarined, (b) fully submerged, (C) 3D-velocity profile of U = 1.8 m/s measured by LDV system, (D) The normalized oscillation of the cylinder and corresponding motion frequencies at U = 1.8 m/s(corresponding to Re = 56520) (E) The 2D-flow visualization using the PIV system for cylinder oscillate in two degrees of freedom at U = 1.8 m/s at cylinder midplane.
​​

Video 1: Spatially resolved deflection of a partially submerged cylinder measured with DIC at a speed of U = 1.62 m / s. Here the Z-axis is the horizontal axis normal to the direction of flow [2].

Institute for Ship Technology,
Marine Technology and Transport Systems
at the University of Duisburg-Essen