Passive Control of Unsteady Cavitation on a Hydrofoil

Cavitation is a process of liquid evaporation, bubble or vapor sheet formation, and further collapse of vapor structures, which plays an undesirable role in many industrial applications. In ship technology and hydraulic machinery, cavitation usually occurs nearby the surface of a ship propeller and rudder, impeller blades in a pump, and distributor vanes and runner blades in a hydroturbine and causes various destructive effects such as vibrations, erosion, and noise and performance decline in immersible bodies. Many studies have been conducted using a hydrofoil for understanding of the characteristics of cavitation and dynamics of cavitation formation. This research is aimed at an experimental investigation of passive methods to control cavitation on a hydrofoil. For this aim, several types of hydrofoils with different vortex generators such as microramp and hemispheretype of vortex generators are manufactured in accordance with Kadivar’s previous numerical works. Different cavitating regimes such as unsteady cloud cavitation and supercavitation at various angles of attack of the hydrofoil are studied in this project. To analyze the effect of cavitation control methods on the cavitation dynamics, a highspeed imaging method is used to explore the spatial patterns and time evolutions of cavitation structures. In addition, a pressure transducer is used to record and analyze the pressure pulsations due to the collapse of the cavities in the hydrofoil wake region. The suppression of unsteady behavior of the cloud cavitation, the stabilization of the supercavity at the supercavitating regime and the reduction of the amplitude of the pressure pulsations has been expected to achieve longer operating life and high reliability. 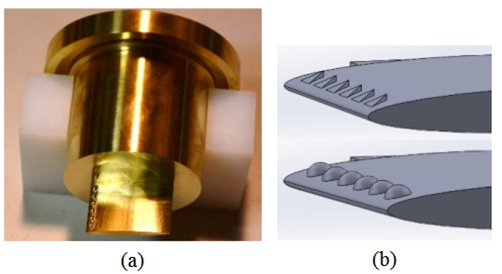