Matter is frequently divided into three different states, namely solid, liquid and gaseous state. These three states differ in the order and mobility of molecules and rely on the interplay of non-covalent forces and thermal movement. In the solid state, the molecules are close together and their position is fixed by intermolecular forces. By heating substances they usually start to melt at a specific temperature and a phase transitions occurs (from solid to liquid). The molecules of a liquid are still close to each other, however they are able to move around and lose most of their order. Further heating finally leads to evaporation and a gas is formed with molecules moving completely independent from each other.

1888, Friedrich Reinitzer described the unusual behavior of cholesteryl benzoate showing an additional phase of matter occurring between the solid and the liquid state – the liquid crystalline state. Liquid crystals combine the order of crystals with the mobility of liquids and since they occur between these two states they are also called mesogens.

Ordinary fluids are isotropic in nature, meaning their physical properties (e.g. optical, electrical or magnetical) appear the same from any direction in space. Molecules highly anisotropic in shape might exhibit liquid crystalline properties leading to unusual and technologically relevant behavior due to their anisotropy. Many compounds show liquid crystalline behavior including polymers, micelles or biological macromolecules such as DNA or the tobacco mosaic virus. However, the focus of the following discussion will be on low molecular weight liquid crystals.

Mesogen = Liquid Crystal
Since the liquid crystalline state occurs in-between the solid and the liquid state it is also called . The molecules causing this intermediate state are called . 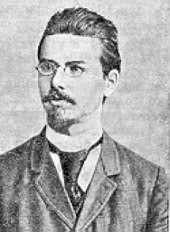 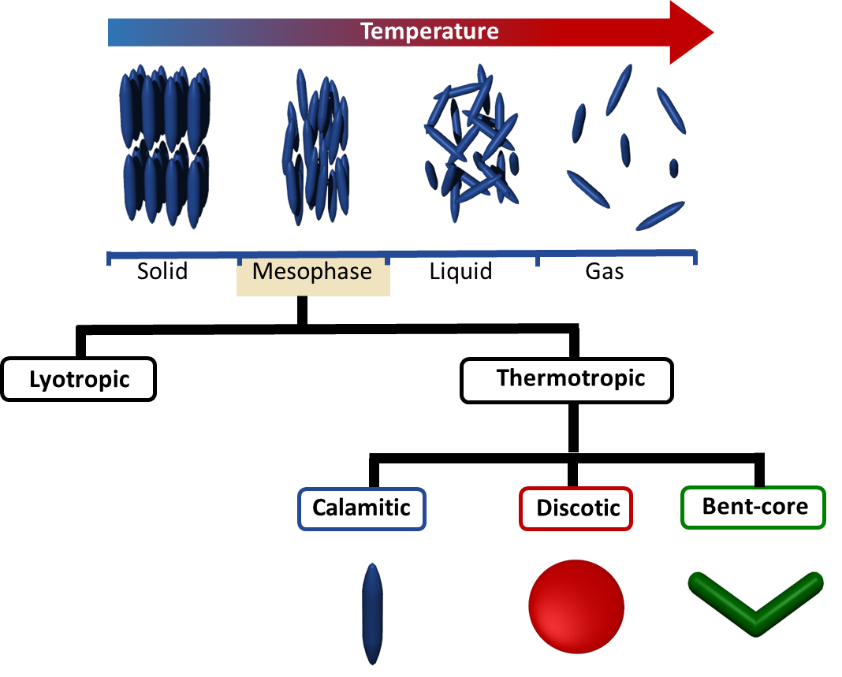 Another common distinction of thermotropic mesogens is with respect to the molecular shape: calamitic (rod-like), discotic (disk-like) and bent-core liquid crystals (also referred to as banana liquid crystals). The molecular design of thermotropic liquid crystals is generally similar. A rigid part (usually derived from arenes) is attached to one or more flexible chains (e.g. alkyl chains) and a polar group. Thus anisotropy in shape allows preferential alignment of the mesogen along one spatial direction.

Discotic liquid crystals are flat molecules consisting of a rigid core with flexible side chains in its periphery as shown above. The disk-like shape enables two-dimensional ordering into columnar phases. Discotic mesogens were discovered in 1977 by Chandrasekhar and Billard.