Hosted by Jens Martin Gurr, pioneering urban historian Norman Klein visited the Department of Anglophone Studies and the KWI (Kulturwissenschaftliches Institut Essen) for two guest lectures and a collaborative research workshop. The media historian, novelist and media artist and Professor of Critical Studies at the California Institute of the Arts in Los Angeles joined Jens Martin Gurr in hosting a workshop on “Media, Memory and the City”, which took place at the KWI on 26 November 2019.

The programme began with a lecture by Florian Freitag entitled “‘Share a Luna Park Memory ... and Make a New One!’ Media, Memory, and the City on Coney Island”, in which Freitag traced Coney Island’s rich and layered history as evidenced by its theme parks and rides. Svenja Kolpack, Brenda Lamboy, Sarah Müller, Jan Niederprüm and Jessica Rähse then presented their transatlantic project “The Future of Our Two Cities (Cincinnati and Essen)”, which took the form of two photo/film essays. Klein himself spoke on “Urban Memory in Database Narratives: Bleeding Through and The Imaginary 20th Century”. The audience then had some time to explore both of Klein’s interactive multimodal media in an exhibition set up in the KWI’s library.

The second panel was opened by Dietmar Meinel and his take on “Urban Memories in Computer Games”. Alexander Starre then explored typography, cartography and untypical formal aspects of print media with “Meaningful Maps: Reading Fictional Cartographies in Print and on Screens”. Alexander Gutzmer inspired discussions about trends for urban co-working spaces with his presentation “The Workspacization of the City”.

Concept artist Mischa Kuball then shared impressions from his thought-provoking work with public places and through participation in a talk entitled “public preposition & public interaction”. Lena Mattheis and Jens Martin Gurr closed the third panel with “Superpositions: Spatiotemporal Layerings in Urban Imaginaries”, a presentation in which they proposed a typology to help understand and group forms of urban layering.

Norman Klein's evening lecture "Archaeologies of the Present: The Cultural Politics of the Seventies and Eighties" picked up on several of the topics discussed during the day. The presentation traced the present-day situation in the US to developments during and since the Cold War and to media developments in recent decades. It exemplified what Klein calls the "new feudal condition" by discussing developments in US cities, especially Los Angeles, where Klein has lived and worked for decades.

On Thursday, 28 November, Norman Klein gave a second guest lecture at Campus Essen on "How to Archive and Narrate Urban Erasure - Across Media". This lecture was an introduction to his scholarly work on urban memory as well as to his two media novels Bleeding Through: Layers of Los Angeles 1920-1986 and The Imaginary 20th Century. Klein then spent time with the members of the City Scripts Research Group to discuss his notion of “scripted spaces”. The workshop as well at the lectures sparked fruitful discussions and were much appreciated by all attendees. 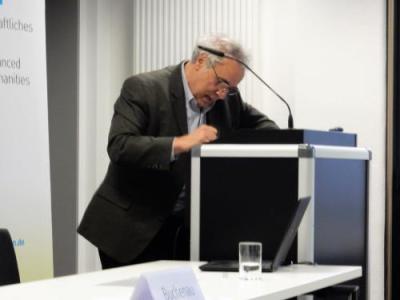 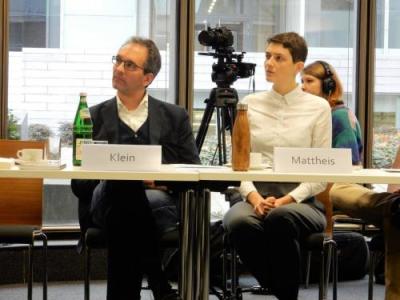 4/2013: Funding for a "Fact Finding Mission" to the Universidade Federal do Rio Grande del Sul (UFRGS) in Porto Alegre, Brazil to establish research relations in urban studies (including a joint doctoral colloquium), DAAD

10/2011: "Romantic Cityscapes: International Symposium of the Society for English Romanticism", University of Duisburg-Essen, funded by the DFG

6/2010: International Conference "Simultaneity, Multiplicity and Chaos in Cityscapes in the Americas and Beyond: Representations of Urban Complexity in Literature, Film and Media", University of Bielefeld