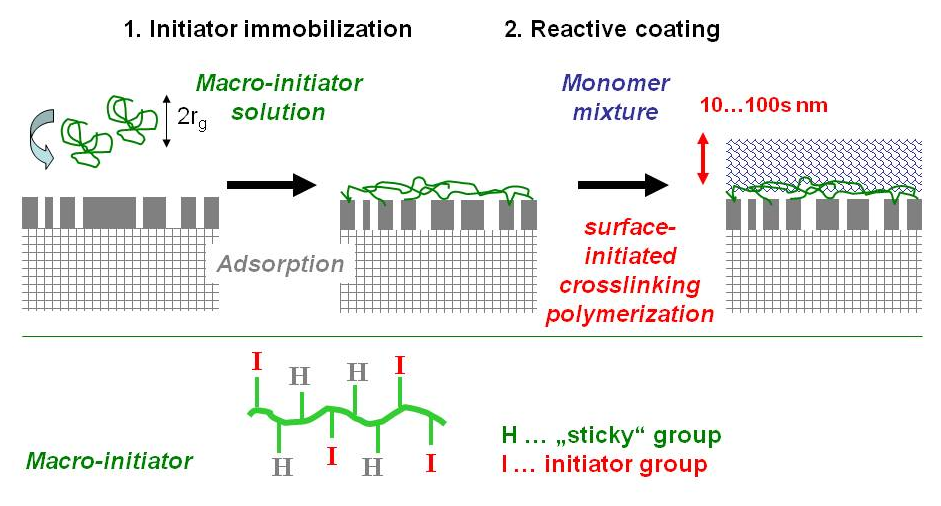 Membrane separation technologies are well established, but in many cases there is still a need to increase the overall performance. One eminent problem is membrane fouling. Therefore it is of high interest to functionalize the surface(s) of membranes which come in contact with fouling substances or particles by tailored protective coatings .

In this project, macro-initiator systems are developed which enable surface-selective reactive coating of membranes with thin functional hydrogel layers. The specific aim is to establish systems which can be used to modify efficiently, under mild conditions also “hidden” surfaces, for instance the lumen surface of capillary membranes or membranes which are already assembled in modules. Anti-fouling hydrogels with polyzwitterionic structure and adjusted mesh size are obtained by in situ copolymerization of zwitterionic and cross-linker monomers. Macro-initiators, containing segments which facilitate strong adsorption on the surface of the membrane polymer and initiator groups which can be selectively activated, are prepared by copolymerization or polymer-analogous reactions and have a molecular weight, i.e. size, which allows access only to certain regions of the porous membrane. In a specific example, a redox initiator system, comprising a macromolecular co-initiator which accelerates the radical formation from water-soluble persulfate, had been established for functionalization of the lumen surface of capillary polyethersulfone ultrafiltration (UF) membranes. The functionalization comprises two main steps, i) adsorption of the macromolecular co-initiator to the barrier layer surface of the membrane during a short ultrafiltration, ii) grafting of the hydrogel layer after bringing the membrane in contact with an aqueous solution containing t he monomers and the initiator persulfate for predetermined reaction time at room temperature. Thus prepared hydrogel-grafted UF membranes show significantly improved anti-fouling behavior for various kinds of organic and colloidal foulants.