to the website of the Environmental Microbiology and Biotechnology in University of Duisburg-Essen.

Here we would like to inform you about our research in the groups Aquatic Microbiology, Molecular Enzyme Technology and Biochemistry, and Aquatic Microbial Ecology.

You will find information about our current projects, our staff members, and our latest publications.

Students will find research topics for Bachelor and Master theses and PhD programmes. 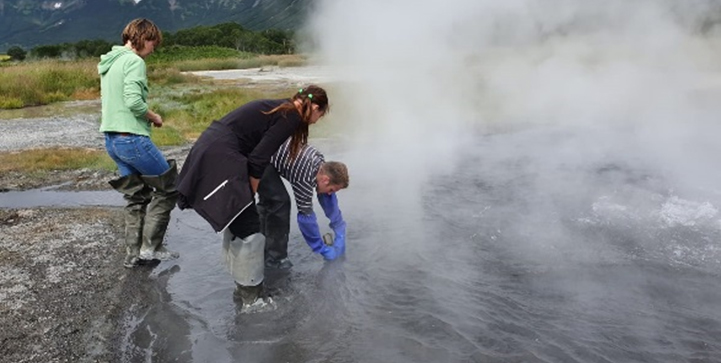 Among bears and hot springs: As part of the German-Russian DFG-RSF cooperation project ExploCarb (Life Science Program), a five-person team of microbiologists spent two weeks in the Uson Caldera in Kamchatka - including a junior researcher from the UDE. During this excursion, they searched for previously undiscovered microorganisms and enzymes using both classical and new methods established at the UDE.

With a variety of hot springs, fumaroles and geysers, the crater of the former volcano Uson provides ideal conditions for microorganisms that are specialized towards extreme conditions. Prevalently frequently in such habitats are representatives of the domain of the Archaea. These single-celled organisms have unique metabolic physiological properties, which makes them highly interesting for application-oriented as well as basic research.

In addition to UDE researchers from the groups of Bettina Siebers (Molecular Enzyme Technology and Biochemistry) and Markus Kaiser (Chemical Biology), also Ilya Kublanov from the Russian Academy of Sciences
(Extremophiles Metabolism Laboratory) 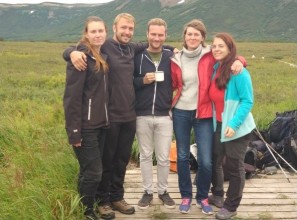 participates to this study. The aim of the ExploCarb project, is to analyses the carbon metabolism of particularly heat-loving ("hyperthermophilic") archaea that grow at temperatures above 80 ° C as well as to identify novel interesting hydrolases for biotechnology.

Therefore, for the first time, the method of activity-based protein profiling (ABPP, doi: 10.1038 / ncomms15352; established by colleagues of the UDE) will be used to identify new biocatalytic enzymes. In addition, the project aims to promote intercultural and scientific exchange between the two countries, which has already been achieved very successfully by the joint expedition and project meetings.

Laura Kuschmierz has won the poster award at the Gordon Research Conference on Archaea 2019 in Les Diablerets (Switzerland). The title of her poster is: “Archaeal Biofilms: Composition of extracellular polymeric substances, exopolysaccharide synthesis and secretion in Sulfolobus acidocaldarius."

Dr. Ivana Kraiselburd, a post doctoral researcher at the group of auqtic microbiology, has won the best poster award at the ISMOS-7, 7th International Symposium on Applied Microbiology and Molecular Biology in Oil System, held in June 18-21, 2019 in Halifax, Nova Scotia, Canada. The title of her poster is: “Anaerobic degradation of polycyclic aromatic hydrocarbons (PAHs) by the sulfate-reducing bacterial enrichment culture TRIP”.

Researchers of the Biofilm Center uncover How many microbes exist on our planet and what is their preferred life style?

Biofilms are a form of collective life with properties that confer many advantages on their inhabitants, and they represent a much higher level of organization than single cells. However, to date no global analysis on biofilm abundance exists. In their recent analysis in Nature Review Microbiology, Hans-Curt Flemming and Stefan Wuertz offer a critical discussion of the definition of biofilms and compile current estimates of global cell numbers in major microbial habitats, mindful of the associated uncertainty. Most bacteria and archaea on Earth (1.2 x 1030 cells) exist in the “big five” habitats: the deep (4 x 1029) and upper (5 x 1028) marine sediments, the deep continental subsurface (3 x 1029), soil (3 x 1029) and oceans (1 x 1029). The remaining habitats, including groundwater, ocean surface microlayer, humans, animals, atmosphere and phyllosphere, account for orders of magnitude fewer cells. Biofilms dominate in all habitats on the surface of the Earth, except in the oceans, accounting for about 80 % of prokaryotic cells. In the deep subsurface, however, they cannot always be distinguished from single sessile cells; they estimate 20-80 % of cells in the subsurface do exist as biofilms, but biofilms are the drivers of all biogeochemical processes. Hence overall 40 to 80 % of cells on earth reside in biofilms and represent the main way of active bacterial and archaeal life.

REGROUND project is featured in different platforms. A documentray film produced by the consortium lead by the members of AG Prof. R. Meckenstock was presented in Campus Essen at 29.01.2019. The film showed how the heavy metals are distributed in the environment, how REGROUND project offers a novel innovation (ColFerroX technology) to immobilize these toxic elements. The team were then interviewed by Deutschlandfunk radio. An article and a podcast can be found via this link.

“WissensNachtRuhr” (Science Night Ruhr) is one of the largest Science Festivals in Germany, which takes place every two years. During this evening, scientists from institutions of the Ruhr area offer diverse activities directed to families, students and everybody interested in research and science. This year, “WissesnachtRuhr” took place on the 28th of September and the Aquatic Microbiology department was present.

Our very own team of science communicators, Ivana Kraiselburd, Meike Arnold, Ianina Kaplieva-Dudeck and Lisa Kroll hosted an interactive stand at “Haus der Technik” in Essen, where visitors were able to extract DNA, observe microorganism under the microscope and discover which microbes are growing in their skin and in every-day objects like phones.

Larissa Schocke won the poster award of the International Society for Extremophiles at the Extremophiles Conference 2018 in Ischia, Italy. The poster was titled "Impact of protein phosphorylation in the thermoacidophilic crenarchaeota Sulfolobus acidocaldarius DSM 639".

The nanoremediation laboratory of Prof. Dr. R. Meckenstock recently has won two prestigious prizes. On July 13th, at the graduation ceremony of the ninth round of the founding competition of GRIID (GründungsInitiative Innovation Duisburg), Dr. Beate Krok, together with Dr. Sadjad Mohammadian and Prof. Dr. Rainer Meckenstock, won the first prize for the best business plan. The business plan was developed during the Small Businiess Management (SBM) course.

In addition, REGROUND project has been awarded to attend first phase of the EIT Raw Materials' accelerator program. The team will receive €15K as a funding to cover their costs for participating in this Accelerator Program from September to December 2018.

n the framework of REGROUND project and in collaboration with the Katholieke Universiteit Leuven (KUL) and Friedrich-Schiller-Universität Jena (FSU-Jena) a new paper is published. The paper present a quantitiave analysis on the effectiveness of Humic-acid coated goethite nanoparticle in removal of Arsenic from contaminated groundwater. The paper can be accessed from this link.

02.02.2018 Hundreds of novel organisms from the deep subsurface

Several hundred novel microorganisms were discovered in groundwater fluids sourced from the deep terrestrial subsurface of the Colorado Plateau. Lead by Alexander Probst (now the Head of Group of Aquatic Microbial Ecology), scientists of the University of California, Berkeley, collaborated with researchers from the University of Calgary and the Joint Genome Institute to apply microbial source tracking based on hydrogeological measurements. They discovered a stratification of microbial metabolism and diversity throughout the subsurface and postulated a symbiotic interaction between two uncultivated archaea that comprise most of the biomass in this subsurface system.

Biologist Dr. Alexander Probst, formerly post doc at the University of California, Berkely, joined the Biofilm Centre to represent the chair for Aquatic Microbial Ecology. Click here for the official press release of the University of Duisburg-Essen.

Philip Weyrauch was awarded with the Microbiology Best Scientific Poster Prize in the Environmental and Applied Microbiology Forum category with the poster “Elucidation of a dearomatising reductase reaction involved in anaerobic degradation of naphthalene” at the Microbiology Society Annual Conference 2017, Edinburgh, UK.

In the presented work we elucidated the 5,6,7,8-tetrahydro-2-naphthoyl-CoA reductase reaction in cell free extracts of sulphate-reducing naphthalene degraders by testing different electron donors. Our data indicate that the reduced ferredoxins required for this reaction are delivered via a 2-oxoglutarate:ferredoxin oxidoreductase and that the downstream pathway proceeds via β-oxidation-like reactions with water addition to hexahydro-2-naphthoyl-CoA.