Almost all of the family configurations that we know today had already existed in the past. Thus, the main difference between historic and present family forms is not the plurality of the practiced models. It is rather that social and economic pressures have become less important, enabling people to choose freely from a variety of different models. Consequently, family has always been about more than a married couple with children. This family form, which is also referred to as the “nuclear family”, exists alongside a variety of other familial  forms, including single-parent-, step-, adoptive-, foster-, and same-sex families.

Figure 1: The prevalence of family configurations in Germany​ 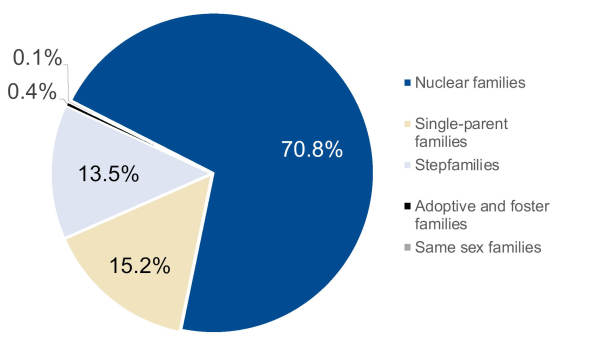 Today, the nuclear family still accounts for the largest proportion of all families with minor children in Germany, followed by single-parent families and stepfamilies with substantial shares of 15 percent and 14 percent, respectively. Adoptive-, foster-, and same-sex families are relatively rare with shares of less than 1 percent. The freedom to choose a specific family form can also be seen in the increasing share of unmarried couples with children. In addition, separation and divorce rates have risen over the course of the preceding decades.

Accordingly, in the case of a separation or divorce, parents have different options when it comes to the legal and physical custody of their children. In this context, a new family model, referred to as joint physical custody, has emerged in recent years. In joint physical custody, children alternately spend approximately half of the time with their mother and the other half with their father. The most common model today remains, nevertheless, the residence model, in which children spend most of their time with one of their parents and see the other one less frequently. Thus, parents must decide in which family environment their children will live in after separation or divorce.

The complex nature of families is, therefore, not a new phenomenon. However, through greater freedom of choice, these dynamic processes have become increasingly important for children and adolescents as well as for society.

For further information about families in transition, a selection of sociological and demographical references are provided below.