A model of the origin of the first cell (Spektrum der Wissenschaft 07/2020) By Ulrich C. Schreiber and Christian Mayer

Non-fiction book about the origin of life now also in English: The First Cell - The Mystery Surrounding the Beginning of Life

Non-fiction book about the origin of life by Ulrich C. Schreiber and Christian Mayer

This book introduces a fresh perspective on the conditions for the genesis of the first cell. An important possible environment of the prehistoric Earth has long been overlooked as a host to the perfect biochemical conditions for this process. The first complexes of continental crust on the early Earth must have already contained systems of interconnected cracks and cavities, which were filled with volatiles like water, carbon dioxide and nitrogen. This book offers insights into how these conditions may have provided the ideal physical and chemical setting for the formation of protocells and early stages of life.

The authors support their hypothesis with a number of astonishing findings from laboratory experiments focusing on a variety of organic compounds, and on the formation of key cellular ingredients and of primitive cell-like structures. Moreover, they discuss the principles of prebiotic evolution regarding the aspects of order and complexity. Guiding readers through various stages of hypotheses and re-created evolutionary processes, the book is enriched with personal remarks and experiences throughout, reflecting the authors' personal quest to solve the mystery surrounding the first cell.

At the joint conference of German and European astrobiology (DAbG, EANA resp., 24.- 28. Sept. 2018), the pathway for a development of a cell from simple organic molecular building blocks was presented for the first time under realistic conditions. The poster outlines six stages of development which can be shown on fracture zones of the continental crust. The fractures are filled with fluids and gases. The focus is the depth of 700 to 1000 meters, where in CO2/N2 mofettes the transition from supercritical to subcritical gases takes place. Due to pressure fluctuations caused by earth tides or by eruptions of cold water geysers the depth of phase transition varies. 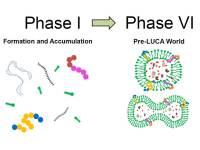 An alternative concept for final storage of high-level radioactive waste

Based on the experiences gained in the project “development of an implementation concept to use former coal mines for underground pumped storage”, a new approach in regard to an alternative final storage system for high-level radioactive waste was developed by geologists of the Faculty of Biology of the University of Duisburg-Essen.

In Germany, research activities for a final storage of high-level radioactive waste are focused on Permian saline layers such as salt domes structures in the North-German Basin. Until now, flat saline layers in homogenous salt bodies seemed not to be suitable because of their depth and low height.

Alternatively, horizontal layers of clay and salt offer a good sealing against gaseous and aqueous fluids migrating from the deeper underground towards the surface.

Based on this, it is suggested to investigate sites beneath saline layers with sufficient height as a location for final storage of high-level radioactive waste. For such kind of storage the following geologic pre-conditions have to be considered:

Additionally, following spatial planning aspects have be taken into account

On this basis, areas such as the South of Lower Saxony, the North of Hesse and Franken or the Thuringian Basin might be suitable. According to first analyses of drilling data and geologic maps available, the Thuringian Basin meets most of the pre-conditions, especially in the surrounding areas of the cities of Nordhausen, Mühlhausen and Stadtilm.

The suggested, alternative concept for a final storage is an addition to the models discussed by the AkEnd (2002). In Germany, a many-fold composition of bedrock and its covering layers provide investigation possibilities to implement such an alternative final storage system.

Colloquium „Heidelberg Initiative for the Origin of Life“ (HIFOL)

This at least is what the geologist Prof. Dr. Ulrich Schreiber and the physico-chemist Prof. Dr. Christian Mayer of the University of Duisburg-Essen in Germany are convinced of. After having presented their theory and conclusive experimental findings on a Gordon conference in Galveston (Texas) and a conference of astrobiology in Nara (Japan), they now have submitted the results to the journal `Origin of Life and the Evolution of Biospheres´ for publication.

„It is the first model on the origin of life which includes a complete process leading from inorganic chemistry to a protocell where the problems of molecule formation, local concentration, driving force and membrane formation are being solved simultaneously” Prof. Mayer from the faculty of Chemistry says.

In April 2014, the newly acquired high-pressure phase equilibria apparatus (SITEC -Sieber Engineering AG, Switzerland) was put into operation. With a maximum operating pressure of 1000 bar and a maximum temperature of 200 °C, the conditions of an open water column in the upper crust of up to 10 kilometers can be modelled. CO2 that turns into the supercritical state (scCO2 - supercritical CO2) at 73.8 bar and 31 °C is of special interest. Supercritical CO2 possesses properties of both, the liquid and the gaseous phase. It is highly mobile, has a lower density than the liquid and dissolves very well organic compounds (e.g., caffeine from coffee beans).

The plant is used for reactions, as they can be executed under prebiotic conditions in the upper continental crust following the models for the origin of life. These include the formation of vesicles, the coupling of amino acids to long peptide chains (and ultimately enzymes) and the formation of nucleotides as components of DNA and RNA.

The apparatus includes a reaction chamber of 36/50 ml as an observation cell, a cold light source and a colour camera system to represent the phase states on a monitor. Pressure generation of commercial CO2 is done by hand by means of a very fine adjustable hand screw press. An additional gas can also be transferred via the second connection into the cell. Sampling is carried out under pressure. Both the liquid and the supercritical phase can be sampled separately.

From 12. to 17. Jan. 2014  the Gordon Research Conference "Origin of Life" (http://www.grc.org/programs.aspx?year=2014&program=origins) took place in Galvestone/Texas. Christian Mayer (Physical Chemistry) and Ulrich Schreiber (Geology) presented the developed model of the origin of life along deep reaching tectonic faults of the early crust.

Why does the Size of the Laacher See Magma Chamber and its Caldera Size not go together? – New Findings with regard to Active Tectonics in the East Eifel Volcanic Field

At the EGU2013 and the Basalt2013 we presented our new findings of the tectonically active Neuwied Basin. Our results of gas-monitoring in mineral springs and mofettes show a split of the East Eifel volcanic field into two parts. Research on analyses of tectonics has revealed a 105° trending strike-slip fault („Laacher See Strike-slip Fault“) cutting the South of Laacher See and through the mofette field in the river Lahn. Regional strike-slip faults in combination with block rotation and uplift and a tectonic movement rates of 1 mm/year could have provided the voids for the magma chambers of the Wehrer Kessel and the Laacher See Caldera. Analogue models show that regional strike-slip regimes (including Riedel shears, chamber-localised graben fault, and a partial Y-shear) play a decisive role for caldera formation. Our research findings suggest that due to the slow movement rates of active tectonic faults, an estimated 18 km3 magma chamber within the brittle fracture section of the earth’s crust beneath the Laacher See cannot be confirmed yet. Additionally, the size of the Laacher See caldera with a volume of approx. 0.5 km³ (with regard to the pre-eruptive surface) is not compatible with the postulated eruption volume of more than 6.3 km³ magma and country rock. Therefore, an order of magnitude smaller magma chamber stretched over a longer vertical crustal section can help to better match the given tectonic movement rates and the size of the caldera.

13.04.2013 At the EGU2013 press conference on April 11, 2013 we reported our early findings of red wood ant (RWA) bioanomalies (suppression of the nocturnal rest phase and daily activity, continuing of the standard daily routine not before the next day) that have been recorded and analysed for several earthquakes with magnitudes of up to about 3.

The specific mechanisms for how and why they show such reactions need to be researched in in situ experiments and in close cooperation with biologists. An open question is whether RWA would react in the same way on earthquakes with higher magnitudes (M > 4), which have not occurred during our period of observation. This will be one topic of future research.

Although the investigation and results presented are promising, they are only a first step towards a completely new research complex. Long-term studies have to show whether confounding factors and climatic influences can clearly be distinguished. However, our early results suggest that it makes sense to consolidate and extend the research to determine a pattern for exceptional activity situations.

As clarified on the press conference, these studies are not provided for earthquake prediction, but are an important step towards the understanding of geobiological processes.

First analyses results of hydrothermal quartz minerals from the region north of Murchison, Australia, were presented at the EGU2013 conference in Vienna. They are from the Archaic Yilgarn craton and have different, partly unknown age. Samples from tectonic quartz veins and impact generated quartz of the Shoemaker crater revealed no unusual results, whereas the analysis of debris of quartz resulted from a conglomerate with a minimum age of 2.7 billion years, showed an amazing variety of organic volatile compounds. Possible formation processes are discussed similar to the Fischer/Troptsch-Synthesis, which were introduced by the published hypothetical model for the origin of life in tectonic fault zones in 2012 (Schreiber et al. 2012; http://link.springer.com/article/10.1007%2Fs11084-012-9267-4).

[23.11.2012] Project partners are research teams of the UDE and the Ruhr-University Bochum (RUB), as well as experts of the RAG Deutsche Steinkohle AG, DMT GmbH & Co. and Rhine-Ruhr Institute for Social Science Research and Political Consultancy (RISP).

The Working Group “Geology” is involved with a sub-project on the geological potential and the siting.

The Underground Pumped Storage Power Plants (UPP) is well underway: Preliminary investigations having already approved that mining shafts of the Ruhr areas are basically suitable for an environmentally friendly energy storage. Therefore the Ministry for Climate Protection, Environment, Agriculture, Nature Conservation and Consumer Protection of the German State of North Rhine-Westphalia supports this project. With that, the feasibility study for the UPP is launched, perhaps a key element to further promote the expansion of renewable energies.

On 23.11.2012,  Udo Paschedag, State Secretary of the the Ministry for Climate Protection, Environment, Agriculture, Nature Conservation and Consumer Protection, presented the subsidary note for the study of UPP to a consortium led by University of Duisburg-Essen (UDE).

The total funding for the concept comprises a total of approx. € 1.3 million for a 18 months project duration. With that the first phase of the two-phase project is funded.

The worldwide discussion on the origin of life encounters difficulties when it comes to estimate the conditions of the early earth and to define plausible environments for the development of the first complex organic molecules.

A hypothetical model for the origin of life is proposed which will be used to design crucial experiments for the model’s verification. Because all proposed processes could still occur in tectonic faults at the present time, it may be possible to detect and analyse the formation of prebiotic molecules in order to assess the validity of the proposed hypothesis.

The project is funded by the Mercator Research Center Ruhr, an initiative of the Mercator Foundation and University Alliance Metropole Ruhr.

Production facilities for renewable energies are usually time-dependent on environmental factors such as sun and wind. The generated power is not necessarily available when it is needed by the consumer. Underground pumped storage power plants (UPP) that can store energy until needed, can bridge this time lag.