Welcome to the American Studies Program at the University of Duisburg-Essen!

American Studies at Duisburg-Essen is dedicated to the multidisciplinary study of North America,

its manifold and often conflicting cultural geographies, literary and cultural production, and multi-ethnic urban and rural societies. Major fields of inquiry include early modern, colonial, romantic, and contemporary literature and history, ethnicity, border cultures, interculturalism, hemispheric and transatlantic relations, urban spaces and places, religion, film, and television. We are particularly interested in the interconnections between U.S. American and Canadian, Caribbean, and Latin American cultures and literatures as well as in the imaginary and actual crossings of multiple borders in North America from the fifteenth to the twenty-first century.

Our program organized the 2010 inaugural conference of the International Association of Inter-American Studies,

it is a member of the Ruhr Center of American Studies, the MERCUR research project "Spaces – Communities – Representations: Urban Transformations in the U.S.A." (2012-2015) and it participates in the university’s Main Research Areas "Urban Systems" and "Change in Contemporary Societies." In collaboration with our international partners we engage in interdisciplinary research and teaching on topics ranging from migration narratives, aesthetic approaches to the American city, the history of American music, the German presence in the United States, and cosmopolitan networks for the production, distribution, and reception of North American literature, film, art, and performance to cultural hybridity, politics of diversity, Native American cultures, U.S. Latinas/os, an inter-American culture industry, and a trans-border consumer culture.

All classes in UDE's American Studies Program are taught in English.

Using a variety of teaching methods (including electronic media and interactive platforms), about twenty instructors offer basic courses in literary analysis, American literary history, and American civilization geared toward students in their first three semesters as well as seminars and lectures on more specialized topics, allowing students to choose their own areas of specialization beginning with their fourth semester in any of our department's B.A. programs. Our master's program in American Studies includes courses on academic writing, literary and cultural theory, methodologies of American Studies, individual authors, interculturalism, media, and a variety of research topics. 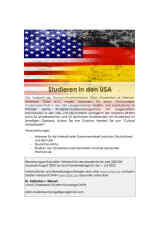