Evaluation of the German National Educational Standards in Science

In response to findings of international large-scale assessments such as TIMSS and PISA the Assembly of German Ministers of Education agreed on educational standards as normative guidelines for secondary schools. The national educational standards define four areas of competence: content knowledge, acquirement of knowledge, communication and evaluation & judgement for the three science subjects: biology, chemistry and physics.

Tests for all areas of competence are currently being developed in the German project ESNaS (Evaluation der Standards in den Naturwissenschaften für die Sekundarstufe I - Evaluation of the National Educational Standards for Natural Sciences at the Lower Secondary Level).  Different science educators work on the theoretical framework, give assistance during the item development and during the empirical testing of the items. The involved science educators are:

For large-scale assessments, competence is demanded to be operationalised in competence models. In most cases competence models use several dimensions of which one dimension usually describes the content of the tasks. A certain competence therefore combines a specified content with other dimensions, which, for example, describe the difficulty. As a result, competence describes more than just having knowledge in a domain. In contrast to other large-scale assessments - like PISA - which define levels of achievement post hoc, for the evaluation of the German national standards a model of competence is used in order to define the difficulty of tasks a priori.

German educational standards define students' learning outcomes in chemistry for 10th grade (KMK, 2005) without a description of compulsory topics. But a content analysis of chemistry curricula shows that there are only few overlaps between the curricula from different states. In order to deal with this deficiency, two types of standard-based test items were developed: The first type provides content information in the item stem (task type A) which students have to use to work on the tasks with a multiple choice/single select format, the second type (task type B) does not include additional content information. So the items and options of both task types are the same and the only difference is the item stem.

The model-fit of the developed test items is investigated with Rasch analysis (Boone & Scantlebury, 2006) assuming item difficulty to increase with increasing content complexity and with increasing level of cognitive processes demanded. Both aspects are taken into account for each item by the construction guideline.

Further analyses of item data - e. g. differential item functioning and distractors analysis- were performed to guarantee their quality. For the person data the influence of the ascertained companion variables on the achievement in the test was measured. The results show that the application of content knowledge correlates strongly with content knowledge and cognitive skills. The correlations with reading comprehension are on a high level as well but lesser.

This study was the first step to develop tests in the field of scientific inquiry.

In the first task the students have to be make a decision whether a given idea regarding a described problem is appropriate or not, for example. Another task is to decide whether an idea - regardless if the idea is well founded or not - is testable or not. Additionally, there are items in which students have to identify the correct order of steps which are necessary to carry out a certain experiment. Furthermore, the students have to decide if a given generalized statement can be deducted from the described experiment or not. The "NAW-Test" shows a reliability of α = .81 and a regularly distributed item difficulty of .24 < p >.89. Although the NAW tests for three different aspects of scientific working a factor analysis shows that the test measures only one construct. Up to 64 % of the variance is manifested by one factor, while the two others factors which are founded can be veritably. This means that the three steps of scientific working described above can be seen as one homogenous construct.

In the first studies in which the NAW-Test was used an interesting difference between girls and boys occurred. A comparison of the different mean scores of both groups shows that girls achieve higher scores than boys for the beginning of year 7 (first year of chemistry education). This small to middle effect (eta = .152, F(1; 569) = 13.124) is highly significant. After another year of schooling the boys catch up to the girls but also at the end of the 7th grade the girls score higher than the boys. 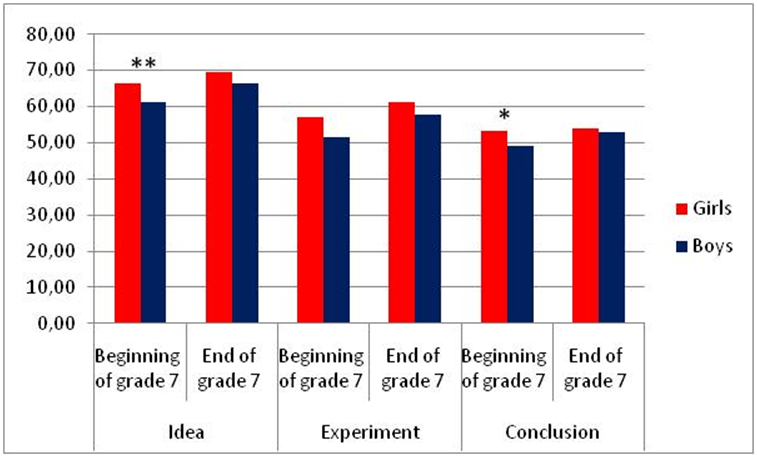 Measuring competences in the area of inquiry

With the onset of school year 2008 / 2009 a new curriculum in primary science education for North-Rhine-Westphalia came into effect. Here, too, one area of competence is the acquirement of knowledge describing aspects of inquiry competence that should be mastered by the end of primary school. Therefore, a student achievement test (paper-and-pencil test) should be developed that would be adequate to measure differences in performance between students from different types of German secondary schools (Hauptschule (comparable to lower-secondary modern school) and Gymnasium (comparable to grammar school)). So, items are needed belonging to different performance or difficulty levels. According to this requirement, the ESNaS-model of competence (Walpuski, Kampa, Kauertz & Wellnitz, 2008), defining different performance levels was used in an adapted version for the item development. The greatest influence on item difficulty was expected to be related to the factor of complexity. And according to the results of PISA 2003 differences in students' achievement which result by the type of school are expected to be found, too.

All in all 140 multiple-choice items are developed with regard to the different areas defined by the adapted model of competence. In the main study the item pool was tested by an entire sample of 1134 5th grade students from grammar school (Gymnasium) and lower secondary modern school (Hauptschule). Due to the number of tasks a multi-matrix-design was used to spread the items over 18 different test booklets, 18 items each, whereas every item is presented in a minimum of four different test booklets. An overlapping of items resulting from this approach allows IRT method for task analysis (Bond & Fox, 2001), therefore a comparison between item and person parameters is possible. The following variables have been controlled: reading comprehension by speed-test (Lenhard & Schneider, 2006) and cognitive skills by subscales (Heller & Perleth, 2000).

The Rasch model could be confirmed concerning the total sample and the partial sample "Gymnasiasten". All in all the data indicate the test being slightly too difficult with regard to the total sample and slightly too easy concerning "Gymnasiasten". In contrary, the results for "Hauptschüler" show clearly that the test is too difficult for this sample. Merely 53 of overall 140 items are located within the spectrum of the participants' abilities. Most of these items belong to the lowest level of complexity. Nevertheless the test instrument is adequate to measure differences between students performance within the partial sample of German Gymnasiasten and between students from both types of school (Hauptschule and Gymnasium). In addition, all factors (complexity, cognitive processes, procedural knowledge) influence the difficulty of an item with task complexity showing the greatest influence. To answer the second research question (Analogous to PISA, can significant differences between students from Gymnasien and Hauptschulen be detected?) correlations were calculated between the mean person ability between the two different types of schools. The difference between the mean person ability of students from Gymnasium (0.469) and mean person ability of students from Hauptschule (-0.915) is highly significant.

How to Measure Experimental Abilities: Hands-on- or Paper-Pencil-Based?

Amongst the core abilities rendered essential in the sciences, experimentation is probably the most characteristic one. Therefore, teachers are challenged to implement approaches to experimentation in their science courses that stress its processes rather than its mere outputs; especially, as science education research has repeatedly pointed out the inadequacy of imitatory experimentation for advancing science understanding (cf. Schauble, Klopfer, & Raghavan, 1991; Hofstein & Lunetta, 2004). Re-orientating experimentation from 'learning of science' towards 'learning to do science' (cf. Hodson, 1996) implies for science educators to scaffold the processes for their students (Lunetta, Hofstein, & Clough, 2007). They can refer to a multitude of scaffolding structures from science education research (e.g. Mayer, 2007; Kipnis & Hofstein, 2008), most of which can ultimately be brought to match with the SDDS-approach (Scientific Discovery as Dual Search: Klahr, 2000). Here, experimentation is constituted by three fundamental elements: (1) searching a mental space of hypotheses, (2) searching a mental space of experiments, and (3) concluding from experimental evidence. This has been translated into a paradigm suitable for schooling purposes: finding ideas/hypotheses - planning and conducting experiments - concluding (cf. Klos et al., 2008).

10- to 12-year-old students from the entrance stage of secondary schools (N ~ 200), who have been taught in integrated science classes for about twelve months, worked on (1) three open hands-on experiments which they (2) documented in structured report sheets; (3) they filled in three paper-pencil-tests assessing the aforementioned experimentation-paradigm. While doing the experiments in pairs, students were videotaped. Videos will be analysed according to adherence to the paradigm (Walpuski & Sumfleth, 2009). Experiments address three different topics to account for possible advantages that single students might have due to special interests. Paper-pencil-tests address the same topics (e.g. separation by evaporation) but in different examples (hands-on: desalination of salt water, paper-pencil: determining the sugar content in sweetened tea). In order to control for sequence effects, administration of the three experiments is rotated partially through a Latin square, as well as the order of administration of paper-pencil- and hands-on-assessments is inverted for half the population. As the three measures build on the same theoretical basis, it is expected that results from the measures will correlate highly with each other.

Results from a pilot study show that the employed paper-pencil-tests are satisfactorily reliable. The implemented experiments are suitable for the age-group as determined through face-validity. The data collection is completed by January 2010. Analysis of videos and report-sheets are going on.

Funded by a grant of the Schering Foundation

Measuring competences in the area of evaluation and judgement
This study is mainly conducted by Maik Walpuski, Osnabrück University)

Following the national educational standards the evaluation and judgement competence in chemistry is defined as the ability to detect and evaluate chemical topics in different contexts (KMK, 2005a). According to Poschmann, Riebenstahl, & Schmidt-Kallert (1998), an evaluation process consists of a minimum of three elements (object, subject, connection between object and subject). During this process criteria have to be identified, evaluation strategies have to be used, and finally a decision has to be made (Jungermann, Pfister, & Fischer, 2005). Furthermore, the evaluation and judgement competence is defined as the ability to decide justifiedly and systematically in complex problem-situations at different options of behaviour (e.g. Bögeholz, Hößle, Langlet, Sander, & Schlüter, 2004). Based on these theoretical assumptions Eggert & Bögeholz (2006) have developed a competence model with the focus on sustainable development in biology to measure the evaluation and judgement competence (e.g. Eggert & Bögeholz, 2006; Bögeholz et al., 2004). Because of its focus on the sustainable development, it cannot be directly adapted for other subjects or topics.

Therefore the main research questions are:

The sample includes 700 students from 9th and 10th grade of German upper secondary schools (Gymnasium). The time needed by students to fill out the tests and questionnaires will be 180 minutes and data are collected on two days. The instruments used on the first day (90 minutes) are:

The tests of evaluation and judgement in chemical/biological contexts and the tests on content knowledge and on application of content knowledge in both subjects are constructed in a multi-matrix design. Because of that every test item is done by 140 students.

The following tests are used on the second day (90 minutes):

Measuring competences in the area of communication
(This study is mainly conducted by Maik Walpuski, Osnabrück University)