This at least is what the geologist Prof. Dr. Ulrich Schreiber and the physico-chemist Prof. Dr. Christian Mayer of the University of Duisburg-Essen in Germany are convinced of. After having presented their theory and conclusive experimental findings on a Gordon conference in Galveston (Texas) and a conference of astrobiology in Nara (Japan), they now have submitted the results to the journal `Origin of Life and the Evolution of Biospheres´ for publication.

„It is the first model on the origin of life which includes a complete process leading from inorganic chemistry to a protocell where the problems of molecule formation, local concentration, driving force and membrane formation are being solved simultaneously” Prof. Mayer from the faculty of Chemistry says.

What is this all about? The detailed environments on the early Earth and the conditions, under which life could originate billions of years ago are largely unknown. In consequence, the possible processes which may have taken place can neither be proven nor excluded. Therefore, most of the models proposed so far are focused on singular elementary steps of prebiotic developments. In its long history, the corresponding discussion about the crucial location on early Earth shifted from the Earth’s surface to the deep sea, from volcanic outlets to shallow ponds. Lacking plausible alternatives, extraterrestrial regions like Mars or the interplanetary space have also been included.

On the other hand, the continental crust was, during a long time, neglected in the discussion. “This region, however, offers the ideal conditions for the origin of life“, Prof. Schreiber says. His focus is on deep-reaching tectonic fault zones which are in contact with the Earth’s mantle. As for example in the region of the “Eifel” in Germany, they are channeling water, carbon dioxide and other gases which constantly rise to the surface. This fluid mixture contains all necessary ingredients for prebiotic organic chemistry. One of the most intriguing aspects is the presence of supercritical carbon dioxide in depths below 800 meters. This supercritical fluid combines the properties of a liquid with those of a gas and presents an ideal solvent for organic chemical reactions. “This allows for many synthetic steps leading to complex biological molecules which otherwise, in a solvent like water, could not be accounted for”, Prof. Mayer explains, “Supercritical carbon dioxide acts like an organic solvent enabling reactions which would not occur in an aqueous environment. Moreover, it forms interfaces with water and hereby generates double-layer membranes which represent the most important single structural element of living cells”.

The fundamental steps of the proposed mechanisms have already been successfully reproduced in the laboratory. This includes the formation of vesicles as simple cell-like structures or the combination of amino acids to longer polymer chains forming the basis for proteins and enzymes. A fascinating detail is the fact that these processes may be proven today as they have left traces in minerals which have grown in the fault zones of the early Earth.

„Tiny fluid inclusions in crystals from Australian quartz dykes which have been collected by Prof. Schreiber contain a large collection of organic substances. They have been encapsulated from the fluid contents of the fault zone during the growth of the crystals. Today, they may help us to identify the chemistry which has taken place.“ With his profound experience in the analysis of natural compounds, Prof. Schmitz is a valuable asset in the research group at the University of Duisburg-Essen which deals with the fascinating question around the origin of life.

From 12 to 17 Jan. 2014 the Gordon Research Conference on “Origin of Life” took place in Galvestone/Texas. Christian Mayer (Physical Chemistry) and Ulrich Schreiber (Geology), both University of Duisburg-Essen, presented the developed model for the origin of life at deep-reaching fracture zones of the early continental crust. The model was corroborated by findings of a complex organic chemistry in fluid inclusions in archaic quartz from quartz veins of Western Australia. In addition, first results of laboratory experiments were presented, in which biological molecules were combinated to form larger units using supercritical carbon dioxide.

The worldwide discussion on the origin of life encounters difficulties when it comes to estimate the conditions of the early earth and to define plausible environments for the development of the first complex organic molecules. Until now, the role of the earth’s crust has been more or less ignored. In our opinion, deep-reaching open, interconnected tectonic fault systems may provide possible reaction habitats ranging from nano- to centimetre and even larger dimensions for the formation of prebiotic molecules (Fig. 1). In addition to the presence of all necessary raw materials including phosphate, as well as variable pressure and temperature conditions, we suggest that supercritical CO2 as a nonpolar solvent could have played an important role (see Fig. 2 and 3). A hypothetical model for the origin of life is proposed which will be used to design crucial experiments for the model’s verification. Because all proposed processes could still occur in tectonic faults at the present time, it may be possible to detect and analyse the formation of prebiotic molecules in order to assess the validity of the proposed hypothesis.

Fig. 2 Formation of reaction chambers at edges of fault planes 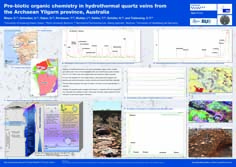 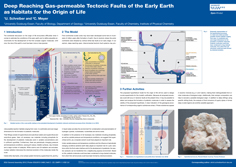