The Primacy of Movement

A person’s movement behaviour influences the process of spontaneous attribution of traits to a much greater extent than does the person's static physiognomic appearance. This was made evident by the results of a study which eliminated the factor of appearance altogether: the movement behaviour of various politicians who had appeared on U.S. and French television news broadcasts was transcribed, then fed into one and the same computer-animated puppet. As demonstrated by a comparison of the personality profiles established for the politicians on the one hand and the puppet re-enacting their movements on the other, the movement data alone were sufficient to make subjects arrive at nearly the same conclusions in both cases.

The rather insipid, unsophisticated impression conveyed by the American politician Smith (upper diagram), the extremely positive opinion formed of Mme. Barzach (middle diagram), and even the decidedly negative characterisation of Jesse Helms (bottom diagram) were all mirrored virtually unchanged in the judgments voiced by the group of subjects asked to comment on the puppet’s personality profile. Surprisingly, the consensus even included judgments as to the ‘beauty’ of the stimulus persons: the doll re-enacting the movements of the former French minister Barzach was described as rather attractive (though not quite to the same degree as the real-life politician). When the puppet copied the gestures of Helms or Smith, however, it was considered just as ‘ugly’ as these politicians had appeared in person. 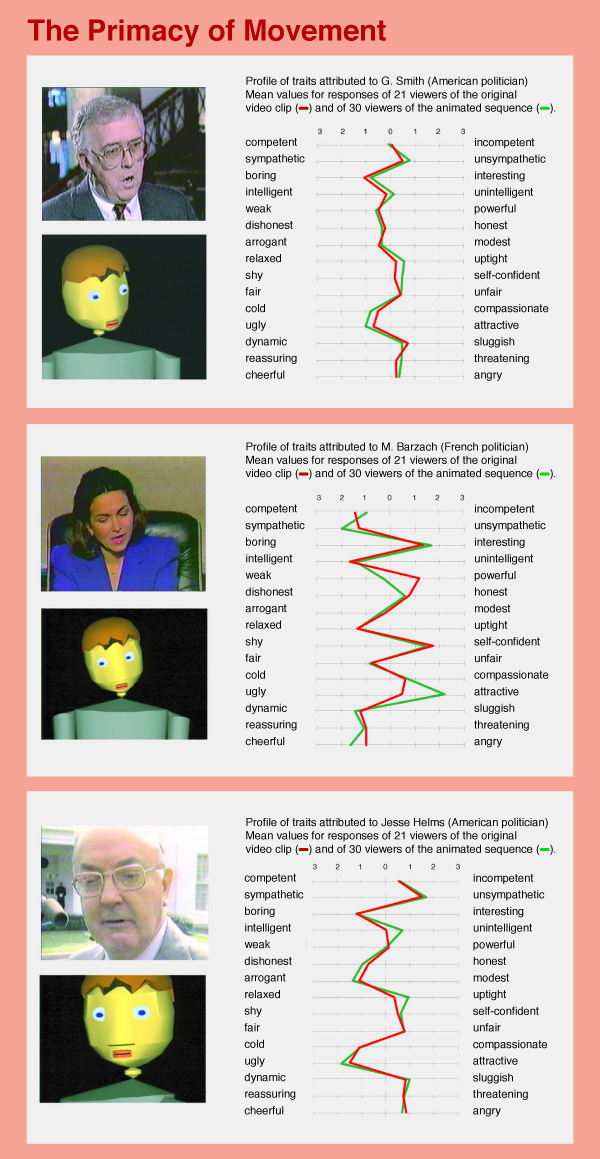