When chemical or kinetic energy is deposited on metal surfaces by reactions or inelastic scattering the temperature of the metal rises. For a long time, the mechanism of energy-transfer has been believed to be adiabatic, i.e., energy is released directly into the phonon system leaving the metal electrons in the ground state. However, our recent experiments using thin-film electronic devices porve the opposite. Energy dissipation may occur non-adiabatically, i.e., hot electrons and holes may be excited in the metal surface. 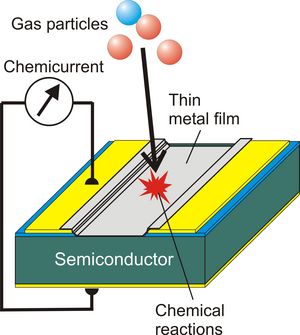 Fig 1.: What is a chemicurrent? When thin metal-semiconductor contacts (Schottky diodes) are exposed to reactive gases an electric current is observed due to direct transformation of chemical into electric energy.
​​ 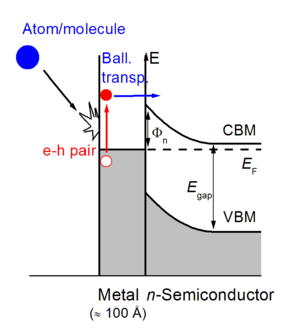 Fig 2.: The principle of chemicurrents: hot charge carriers generated by a surface reaction may travel ballistically through the thin metal film and be detected as a current in the Schottky diode.
​​

To detect the ultrashort living hot charge carriers, the self-made electronic devices are exposed to the reactive gas particles. The detection is schematically demonstrated in Fig. 1 and the principle is explained in Fig. 2 for n-type metal-semiconductor contacts (Schottky diodes). The metal film thickness is in the range of the mean free path of the excited charge carriers. The difference between the Fermi level EF and the conduction band minimum is the Schottky barrier height. If electron-hole pairs are generated at the surface, the hot electron may travel ballistically through the thin metal film, traverse the Schottky barrier, and is detected as a chemicurrent in the diode. This method represents a direct transformation of chemical energy into electricity. The barrier height is typically 0.5 eV in case of Si. 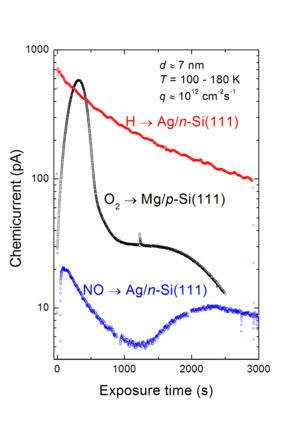 Fig 3.: A collection of chemicurrents transients for various reactions. The traces represent the kinetics of the chemical reactions.
​​

The detected currents are proportional to the reaction rate at the surface. Hence, the observed chemicurrent transients represent the kinetics of the respective surface reaction. This is shown in Fig. 3 for a various chemicurrent transients. The exponential decay of the current during exposure of Ag films to atomic hydrogen is attributed to spontaneous adsorption of the atoms and abstraction of adsorbed hydrogen. The chemicurrent during oxidation of a Mg film on p-Si(111) is described theoretically by a nucleation and growth model indicating that clean Mg surfaces are rather inert to molecular oxygen but as soon as oxide islands exist the oxidation process is promoted. The chemicurrent by interaction of NO with Ag exhibits two maxima which are due to molecular adsorption and intermolecular reactions at the surface.

The work is supported by the Deutsche Forschungsgemeinschaft within the SFB616.