Ultrathin films and nanoparticles on surfaces

Thin metal films in the thickness range between 1 and 30 nm are deposited on semiconductor substrates to be used as hot charge carrier detectors (see chemicurrent research) or as catalysts. The interface properties are studied by photoemission or current-voltage (I/V) analysis as schematically shown in Fig. 1. The I/V curves reveal the homogeneity and the Schottky barrier of the metal-semiconductor interface. Depending on the preparation the thin films are often metastable. Exposure to reactive gases or thermal treatments lead to variations in the morphology. Fig. 2 shows an example of thin Ag films on Si(111) as seen with the electron microscope. The left panel shows a 7 nm film after preparation. The middle panel shows the same film after exposure to NO molecules. Obviously, the gas-surface reactions changed the film morphology significantly. Less impact on the morphology is observed with thicker films of 10 nm. The right panel shows the microscope image for a 10 nm Ag film after NO exposure. 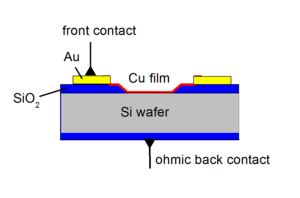 Fig 1.: Schematics of an ultrathin film Cu/Si diode and contacts to perform current-voltage measurements. They provide information about the homogenity and the Schottky barrier of the interface.
​​ 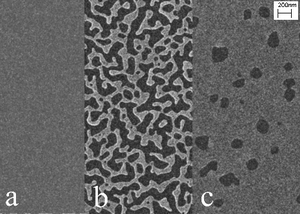 Nanoparticles fabricated in the gas phase are deposited on surfaces to study their size-dependent physical, chemical and catalytic properties. Fig. 3 shows a transmission electron microscopy image of agglomerated SnO2 nanoparticles. The valence band plasmon energy of the particles exhibits a strong size effect. It varies from 19.2 eV for 5 nm particles to 16.2 eV for bulk material. 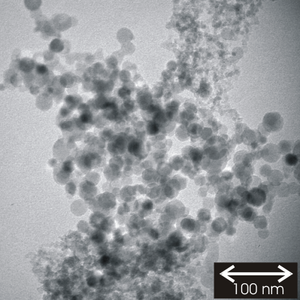 The nanoparticle studies are funded by the Deutsche Forschungsgemeinschaft within the SFB445.