In the eleventh revision of the International Classification of Diseases (ICD-11) of the WHO, gambling disorder and gaming disorder are classified as “disorders due to addictive behaviors”, which are considered as occurring either predominantly offline or predominantly online. Also in the ICD-11, other behaviors may be considered for the category “other specified disorders due to addictive behaviors”. We consider problematic online pornography use (although this may also be considered a subtype of compulsive sexual behavior disorder in the ICD-11), problematic online buying-shopping, and problematic use of social networks as potential disorders belonging to this category.

Studies addressing the (bio-)psychological processes involved in different types of the aforementioned predominantly online addictive behaviors are needed in order to improve prevention and treatment. The proposed Research Unit focuses on the most prominent predominantly online addictive behaviors, namely gaming, pornography use, buying-shopping, and social-networks use. We use the umbrella term Internet-use disorders (IUD) when referring to the aggregated group of specific types of an uncontrolled and addictive use of Internet applications. The overall goal of the Research Unit is to contribute to a better understanding of the common and differential psychological and neurobiological processes underlying different types of IUD.

Based on a comprehensive theoretical model, namely the Interaction of Person-Affect-Cognition-Execution (I-PACE) model, we aim to investigate the involvement of the theoretically argued (bio)psychological processes, in particular affective and cognitive mechanisms, involved in the development and maintenance of these predominantly online addictive behaviors. The core concepts, which will be addressed in the Research Unit are cue reactivity and craving, executive functions and specific inhibitory control, implicit cognitions, and decision making. A cross-sectional comparison together with a follow-up investigation of individuals with recreational/non-problematic use, risky use, and pathological use of specific Internet applications, will allow for the identification of stages of the process of a predominantly online addictive behavior. 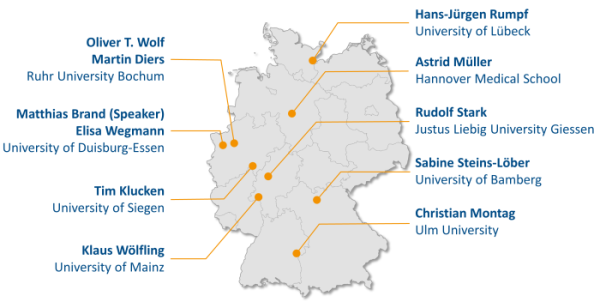 One central characteristic of the proposed Research Unit is that we will investigate more than 1450 participants at several sites using the same core battery of experimental paradigms, neuropsychological tasks, questionnaires, biomarkers, and ambulatory assessment, and including a six-months follow-up survey. By investigating the hypotheses regarding the involvement of affective and cognitive mechanisms in IUD in the proposed Research Unit, we will not only contribute to a better scientific understanding of the psychological processes of IUD, but we can also contribute to clinical applications by showing which affective and cognitive mechanisms should be addressed more intensively in prevention and treatment.

We look back on a successful year 2021, in which FOR 2974 started its work in May. Despite difficult conditions and without being able to physically meet once as a whole group, we have so far been able to achieve the milestones we set and in particular to meet the start of data collection with only minor delays. What has happened in FOR 2974 since May 2021? A lot!

The German Research Foundation (DFG) has approved the research group (FOR 2974) "Affective and cognitive mechanisms of specific Internet-use disorders" (ACSID).