We are a group of students from the University of Duisburg-Essen, working in the field of experimental astro-physics. The goal of ARISE is to improve the understanding of clustering of charged grains in the context of planet formation.

Mutual collisions between mm-sized particles are a crucial process in planet formation and not well understood. Recent experiments showed that such collision leads to electrical charging of particles, which changes the collision behaviour significantly. The coefficient of restitution drops and sticking between grains is observed. A long term observation of clustering of charged grains will show, if tribocharging can be a powerful motor in the first steps of planet formation.

Therefore we conducted roughly 1000 experiments onboard of the ISS during two month onorbit-operation-time in 2018. 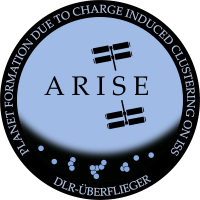