Behind the Scenes: Physics

Planets are created in protoplanetary disks (PPDs) which are the initial stage of planetary systems like our solar system. They include a central star surrounded by gas (hydrogen and helium) and a disk of µm-sized (this matches roughly the diameter of a hair) dust particles. The first steps of the planet formation can be attributed to collisions between the dust particles.

After collisions they mostly stick to each other creating larger fractal aggregates. The sticking force which holds these aggregates can be expressed by the JKR-Model (named after Johnson, Kendall and Roberts)

which overcome the sticking force. The rebound force depends mainly on the mass of an aggregate, its relative velocity towards a target Δv and the collision time.  The results is that mm-sized aggregates bounce off from each other in collisions. This is the so called “bouncing barrier” and it is not easy to argue why larger structures can form in the PPDs without considering further effects. On much larger scales on the km size the grow can be continued due to gravitational collapses. This gap in the planet fromation process is our main research topic. 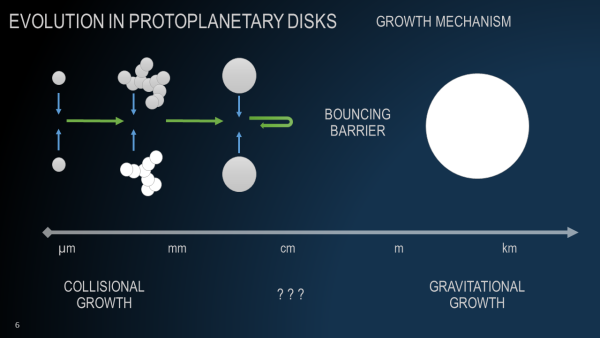 The bouncing barrier in the planet formation process.
​​

Many possible mechanisms have been introduced in the recent years in order to overcome this bouncing barrier. One possible explanation is that aggregates charge in the collision processes and are attracted to each other by the electrical field created by this. The net force between two aggregates is mainly described by Coulomb’s law,

with the charge q of two aggregates and the distance r between them. When the aggregates are insulators, the charge can be distributed irregularly along the surface of the aggregate. In this case aggregates can behave as dipoles and the resulting force can differ from the coulomb force when they are near to each other. A simple way to describe this effect is the electrical dipole. Here, the force on an aggregate are additionally described by

where we have to consider the dipole moment p and the angle of an aggregate respective to the dipole field of another particle. Whether larger aggregates form or not can be attributed to the force balance between these both electrical addends, the sticking force and the collisional/rebound force.