In order to make a better prediction how the electrical interaction can affect the growth process on longer time scales we designed an experiment for the International Space Station (ISS). Here, we can charge small glass spheres in a controlled way and observe an undisturbed clustering process for hours. 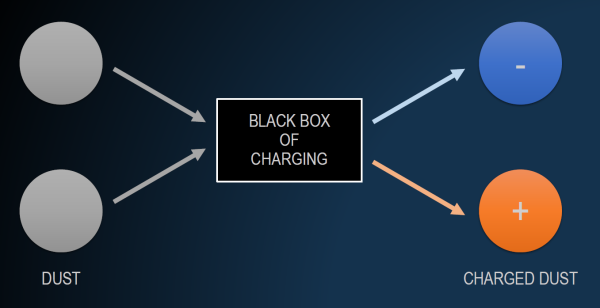 The black box of tribocharging.
​​

The mechanism of collisional charging (triobocharging) is not well understood. Even though it plays an important role in the first steps of the planet formation process, where it might explain the growth of cm-sized aggregates. Prior research showed that this is not possible due to "Hit and Stick" collisions only.

The main objective of ARISE is to understand the reason behind tribocharging and its impact on the clustering of mm-sized grains. This will hopefully help to understand how the black box of tribocharging work and therewith also many other phenomenons as explained above. The experiment will be launched in spring 2018 to the ISS and maintained by "Alexander Gerst".