About the competition and its continuity

This competition constitutes the first step towards the development of power system optimization test beds, which are aimed at ascertaining and performing comparative analysis on the general applicability and effectiveness of emerging tools in the field of heuristic optimization. Researchers from computing and power engineering fields participated in the competition, which gave a great kick-off to the task of benchmarking different algorithms with respect to their application to OPF problems.

Four test networks with varying degrees of complexity were used to define the OPF problems, which were treated as black box tasks in the competition in order to ease implementation aspects and to encourage transparency in problem evaluation as well as integrity in storage of results to be submitted and compared. To this aim, an encrypted file was prepared based on functionalities of Matlab and MATPOWER toolbox in order to perform automatic evaluation of OPF’s objective function and constraints as well as to collect and store automatically the results. Preliminary tests proved that all optimization test cases are solvable, but some of them constitute very hard-to-solve tasks, in which finding feasible solutions is a key challenge.

Like participants of the 2014 Competition, researchers who are interested in testing new optimization methods are encouraged to focus exclusively on implementation of the particular optimization algorithm to be used, which could include any special strategy for constraint handling or treatment of discrete/binary optimization variables associated to transformer and compensation devices. Detailed instructions concerning testing requirements and submission of results can be found in the document of Problem Definitions and Implementation Guidelines. In case of beating the best results achieved so far (cf. table of best performing algorithms shown below), please submit the zipped folder, which is generated automatically from the encrypted file ‘test_bed_OPF.p’, to Prof. István Erlich (istvan.erlich@uni-due.de) and Dr.  José L. Rueda (J.L.RuedaTorres@tudelft.nl) in order to perform comparisons with the results presented in the 2014 IEEE PES General Meeting and to update the table of best performing algorithms. The implementation codes of the tested algorithm must also be submitted along with final results for full consideration in the evaluation. The submitted codes will be used for further tests, which are intended to crosscheck the submitted results. The submitted codes will be in the public domain through this website and no intellectual property claims should be made. 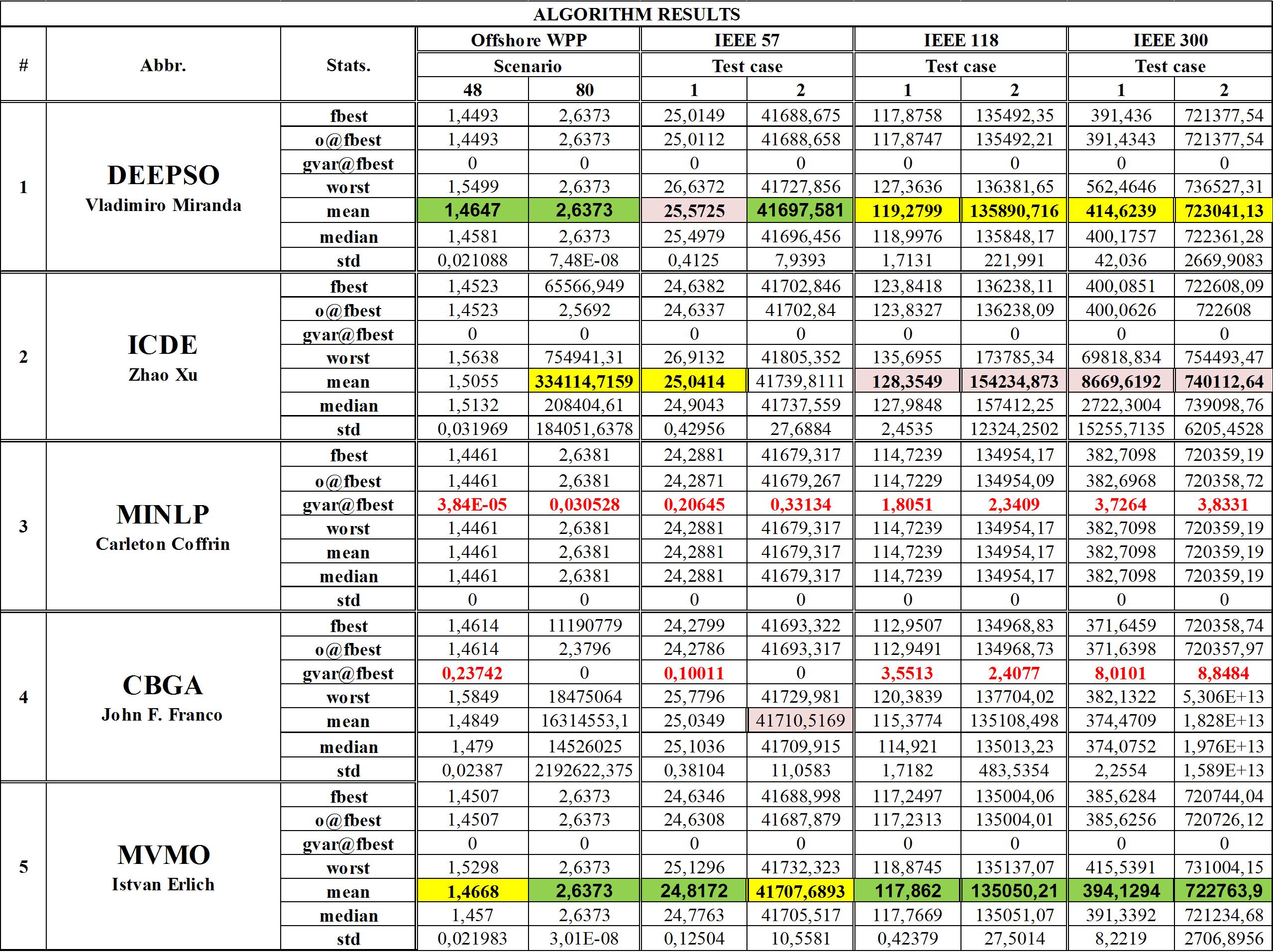 Evaluation of the results

Implementation and results of the top five algorithms:

* The Mean-Variance Optimization algorithm (MVMO) was not considered as a participant algorithm, but it was used to produce reference results for the comparisons.