The direct conversion of heat flows into electrical energy is not necessarily the most efficient way, but it is a relatively robust way, since no mechanical components are required. For the autonomous energy supply of sensors and actuators, direct conversion is therefore definitely an option. Up to a few hundred degrees hot side temperature, thermoelectrics also provide a quite remarkable power density. At even higher temperatures above 1000K, direct contact with the heat medium becomes increasingly challenging for thermoelectrics. 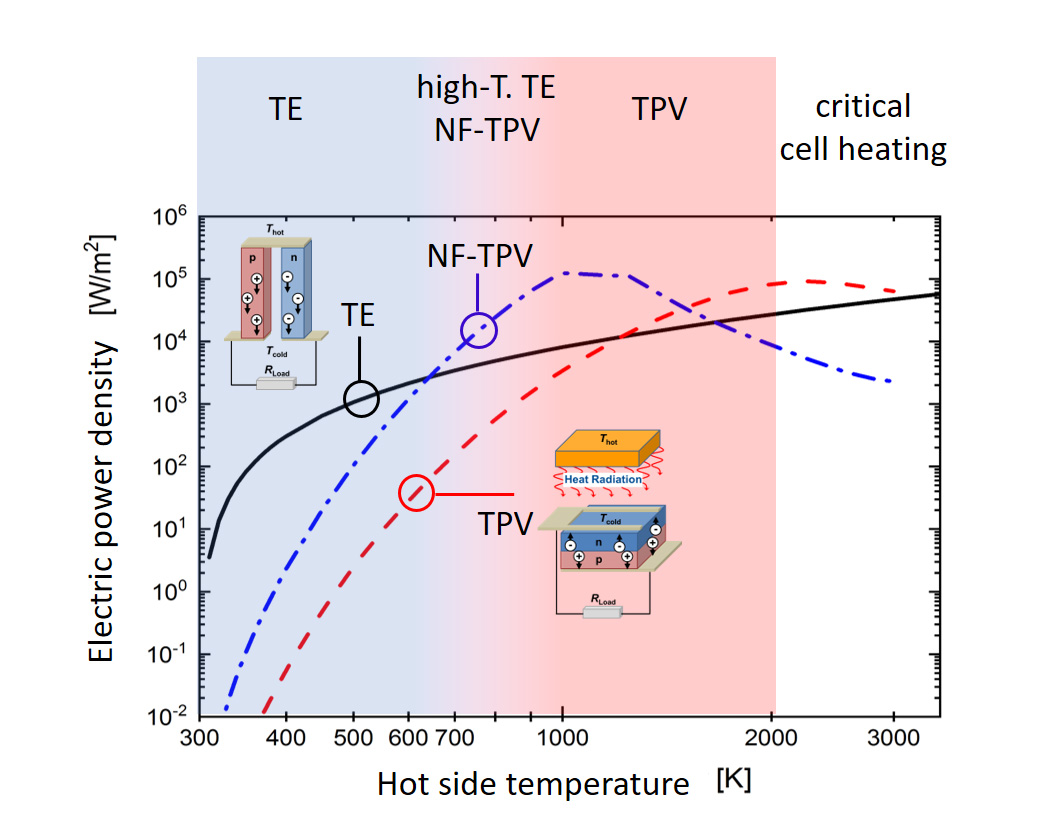 An alternative in this temperature range could be the thermo-photovoltaics, since it does not require direct contact with the hot medium, but instead converts the heat radiation into electrical energy with a photovoltaic cell (see figure). The electrical power densities become comparable or even exceed those of thermoelectric generators. Modern developments make use of the near-field of radiation and can thus achieve considerable power densities even at lower temperatures.

The search for novel or alternative concepts for the direct conversion of heat flows and the estimation of their physical limits is an essential part of our thermoelectric activities.

How can the transformation from a carbon based economy to a sustainable use of energy – a so-called low carbon economy – be done? This is one of the most urgent questions, scientist have to answer within the next years. The efficient use of waste heat may be a contribution towards a further increase of the efficiency of primary energy sources and therewith to a reduction of the carbon dioxide production.

Thermoelectric materials can directly transform a temperature difference into electricity. Even though the efficiency of this process is not enough to build up power plants solely based on this effect, it could be used for waste heat recovery. Every process which generates heat can be used as primary heat source, like stoves and cars, but also many processes in chemical industry or electric power plants.

The physical principal behind thermoelectricity is the Seebeck effect: Electrons move with a certain velocity within a metal or a semiconductor. The velocity changes with the temperature. Within a temperature gradient, the fast electrons from the hot side have a much higher probability to move to the cold side than the other way round. As a consequence, there will be an accumulation of charge carriers at the cold side of the material. This accumulation corresponds to an external electric field which can be used for the generation of usable electricity if a load is added to the electric circuit. If a material shows a high Seebeck-effect, it can be a suitable candidate for thermoelectric applications. 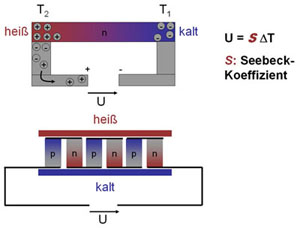 There are few materials which traditionally have been used as thermoelectrics. Important representatives are telluride based alloys. Tellurium is one of the rarest elements on earth. Its price is much higher than that of gold, and the prognosis is a steady rise in price. It is therefore necessary to develop thermoelectric materials using a raw material which is abundant and environmentally unobjectionable. Several research projects of our group deal with this question:

Single crystalline silicon has a high thermal conductivity, making it unsuitable for thermoelectricity. By nanostructuring, the figure of merit can be increased. The nanostructured silicon is obtained by a bottom-up approach, starting with silicon nanoparticles from a gas phase process. Within the German priority program on nanoscaled thermoelectrics and the NanoEnergieTechnikZentrum (NETZ), we exploit the chances of nanostructured silicon for thermoelectricity. On the other hand, silicon is not very robust against oxidation. Therefore, a second route towards sustainable thermoelectric materials is based on semiconducting oxides (NRW-Junior Research Group).

We start with a silicon nanopowder and compact it to a nanocrystalline bulk by a current and pressures assisted sintering technique. By a combined theoretical and experimental appraoch, we have recently shown that percolation effects within the nanopowder influence the microstructure of the final sintering product. Joule heating occurs along a network of distinct current paths through the porous powder. As a consequence, hot spots form within this interconnected network. At these hot spots, the nanopowder partially melts and microstructural rearrangements set in. Density fluctuation and correlated arrangements of pores are therefore very typical for the obtained sintered pellets.

Since the nanopowder is thermoelectrically active, the Peltier effect plays a role during sintering. At the interface between graphite electrode and nanopowder, either Peltier heating or cooling occurs. This produces a temeprature gradient along the pressing direction of the machine. Both, morphology and electronic properties of the sintered pellets are affected by this effect.

For the most of the history of thermoelectricity, efforts have concentrated on improving the thermoelectric figure of merit zT. At the University of Duisburg-Essen we are not only pushing for a higher figure of merit but also for the engineering of new device concepts. It was proposed that a thermoelectric generator can be made from a PN junction as shown in Figure 1 [1-2]. The technological advantage is that the hot side electrical and mechanical contact is no longer needed in this device concept; this has tremendous implications due to the difficulties of high temperature stable contacts.

Figure 1 – a) Conventional thermoelectric device. b) PN junction TEG with electrical contacts made at the cold side.
​​ 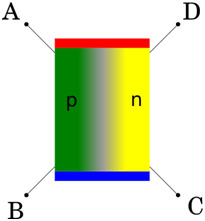 The construction of a thermoelectric generator (TEG) based on nanocrystalline silicon is realized within an AiF cooperation project together with IUTA and SLV. Highly doped silicon nanoparticles are synthesizes at IUTA by a scalable gas phase process. The nanoparticles are sintered by a current-activated, pressure-assisted densification method (also known as Spark-Plasma-Sintering), which preserves the nanostructure . For the construction of a TEG, the nanosilicon is metalized by electrochemical plating methods and cut into single elements (see picture). Those elements are bonded to ceramic substrates by a novel sintering technique at SLV to build the TEGs. One TEG with 100 thermoelectric elements was measured at the German Aerospace Center (DLR). At a pressure of 1.5 MPa, the TEG sustained a hot side temperature of 600 °C and  cold side temperature of 300 °C, generating 1 W of electrical power. 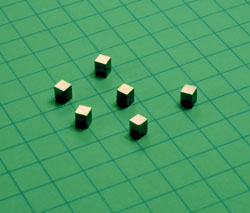 On 10 March, Dr. Gabi Schierning was awarded the 2014 NRW Innovation Prize in the “Young Talent” category for the development of a thermoelectric generator out of environment-friendly material.