Here, you find an overview of our research interests. We discuss some projects and also list some current collaborations. There are several recent articles which you can download. Our complete list of publications can be found here. 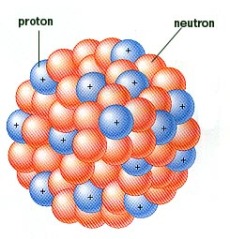 A good example is the atomic nucleus shown to the right. It consists of many nucleons, the protons (blue) and the neutrons (red). They all interact with each other and move in a very complicated way. Large parts of the quantum mechanical excitation spectrum have statistical features which are well described by assuming that the interaction matrix elements can be replaced by random numbers. Hence, the Hamiltonian can be viewed as a random matrix. One often refers to this as Quantum Chaos in nuclei.

In several different branches of physics, we study chaotically coupled systems or, equivalently, systems with symmetry breaking. The coupling or the symmetry breaking has a strong influence on the spectral statistics. In a recent work, we look at the time evolution of a certain energy localization effect which has been observed in coupled elastodynamical systems.

Recently, we carried out detailed studies of the doorway mechanism in the framework of Random Matrix Theory. Doorways are distinct states in complex quantum systems which couple to a background of other states which often can be modeled by random matrices. Important conclusions about various systems can be drawn once the statistical implications of the doorway mechanism have been understood. The superscars in the barrier billiard provide an ideal model scenario for an in-depth investigation. In this context, we also calculated the distribution of the coupling coefficients to the doorway. The doorway mechanism is closely related to an important question of quantum information, namely how a prepared state is influenced by the mixing to its environment. We find a striking recovery and saturation of the survival probability.

As discussed above, nuclei very often show statistical features which are well described by random matrices. However, that is not the full story yet, because at some excitation energies, the nucleons move coherently in phase space. This leads, for example, to vibrations and rotations of the nucleus as a whole. Those collective excitations are not quantum chaotic, they rather tend to behave regularly. Proper Random Matrix Models can be used to distinguish collective from quantum chaotic motion, to some extent even purely from the measured data. We analyzed experimental data of magnetic scissors mode excitations and of electric pygmy dipole excitations.

This also means that the strong arguments recently put forward for single-particle systems in favor of the Bohigas-Giannoni-Schmit conjecture cannot be carried over in a straightforward way to many-body systems. (The Bohigas-Giannoni-Schmit conjecture states that the spectral fluctuations of a quantum system are described by random matrices if the corresponding classical system is chaotic in the usual sense of classical mechanics.) We devote considerable efforts to the understanding of the interplay of incoherent single-particle and collective motion as well as its impact on the level statistics in many-body systems. We began with investigating spreading and its semiclassical interpretation in a model system in which we always have control over the individual particle dynamics. We derive, under rather general circumstances, that the collective observables of the quantum system relate to the classical dynamics. 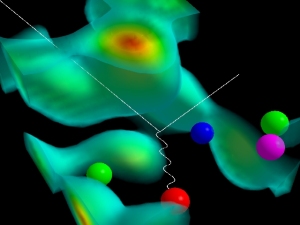 Courtesy of Derek Leinweber (CSSM)
​​Quantum Chromodynamics (QCD) is the theory of the strong interaction. The quarks (the colored spheres) interact by exchanging gluons which are described by gauge fields (the green clouds). Unfortunately, QCD is so involved that analytical calculations are only feasible after drastic approximations. Thus, one resorts to demanding numerical simulations, referred to as lattice gauge calculations. We contributed to the statistical analysis of those lattice data which show that QCD has much in common with disordered mesoscopic systems in condensed matter physics. But QCD is even more complicated, in particular due to chirality and chiral symmetry breaking. We setup an effective stochastic field theory. Presently, we investigate the motion of the quarks in individual gauge field configurations which matches the way how lattice gauge calculations are done. As a first step, we identified a hierarchy of semiclassical limits in QCD.

Supersymmetry became a prominent tool in the Theory of Random Matrices and Disordered Systems. We developed the Graded Eigenvalue Method as a new and exact technique to solve Random Matrix Models. In the course of doing so we were led to address the general problem of harmonic analysis on superspaces and, in this context, the theory of supergroups. Here is an introduction to the main ideas. We showed that certain matrix Bessel functions (in mathematics referred to as Gelfand's spherical functions) are kernels of diffusion equations which drive systems with arbitrary spectral correlations into the chaotic regime. We derived various new and explicit results beyond the unitary case for these diffusion kernels in ordinary and super spaces. As a side result, we also proved a supersymmetric generalization of Harish-Chandra's famous integral formula.

There is a close relation of these issues to Calogero-Sutherland models. We constructed a large class of those models in superspace. In a most natural way, models for two kinds of interacting particlesresult which even have a physical interpretation.

Supersymmetry is nowadays indispensable for Random Matrix Theory, because it yields an exact representation of many Random Matrix Models in terms of supermatrix models in such a way that the number of degrees of freedom is drastically reduced. We use this in many applications. Some examples may illustrate that.

Consider a Hamiltonian that depends on some parameter. The correlations in this parameter are known to have universal features. Another observable is fidelity. It measures the overlap between states, evolved with a perturbed and an unperturbed Hamiltonian, depending on the perturbation parameter. Hence, in some way, parametric correlations and fidelity must be related, but it was unclear how. Supersymmetry helped us to discover surprising relations between parametric level correlations and fidelity decay.

​Classical wave phenomena are ubiquitous in technical applications. Quantum Chaos is the statistical theory of quantum waves. What can we learn from Quantum Chaos for classical wave phenomena? - We addressed this question by studying elastomechanical systems in a series of investigations over the years. This is non-trivial due to the presence of modes (pressure and shear) and due to the complicated boundary conditions. Among other things, we presented the first purely experimental and statistically highly significant study of parametric correlations. More recently, we showed that the elastic displacement field behaves statistically just like a quantum wave function. However, there is a beating phenomenon between the different modes. We now apply "semiclassical" ideas, that is, we study the ray limit of elastodynamics in which the wavelength is small compared to all system geometries. A first step was a Weyl approximation to the level density of the quartz sphere shown to the right. This is a monocrystal of grapefruit size whose spectra have been measured with fantastic precision. 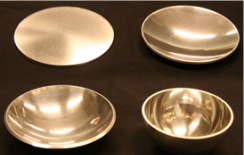 More ambitiously, we now work on understanding of elastodynamical spectra by relating fundamental features of those systems to geometric quantities such as periodic orbits. In particular, we became interested in shells because of their relevance for all kinds of applications, ranging from auto bodies to rockets. We considered a family of shells of revolution, with the disk and the hemisphere as limiting cases. We managed to explain a striking clustering effect in the spectra using periodic orbits. 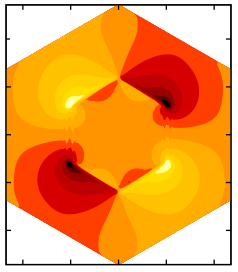 ​Little is known about the mechanical properties of systems on the micrometer and nanometer scale. An example is the cantilevers shown to the left. Nonlinear or chaos-related effects are needed to gain deeper insight into those systems. We wish to apply our knowledge of chaos theory and elastodynamics to the micrometer and nanometer scale. In particular, we are interested in micro-electro-mechanical systems (MEMS) and nano-electro-mechanical systems (NEMS) which are nowadays so important in engineering. We used Euler's theory for rods to understand mechanical properties of cantilevers as shown in the picture.

​The continuum theory of elasticity is bound to fail at those scales where the atomistic structure of matter becomes relevant. It is important to figure out on which scales this happens. We studied strain in semiconductor core--shell nanowires in an atomistic and in a continuum model. We found a remarkable robustness of the continuum theory. 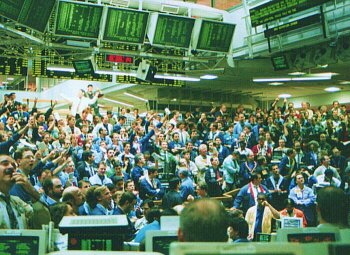 ​What is theoretical physics? - Our definition is the following: Theoretical physics is construction and analysis of mathematical models for the quantitative description of reproducible experiments. These models ought to be as compatible as possible with each other to yield an ever more unifying picture for the measurable features of our world. - There is no reason to exclude biology, sociology or economics from the list of interesting research topics. On the contrary, we think that we physicists would make a big strategic mistake by confining ourselves to the more established topics and by leaving, for example, the quickly expanding field of mathematical modeling in economics to the mathematicians. The physicists' expertise, in particular the data- and experiment-oriented approach has a truly high potential in this field.

The time series of stocks are correlated, because the performance of the corresponding companies is mutually connected. The measurement of those financial correlations is very important for risk management. For various reasons, the empirically obtained correlations are dressed with noise. We developed methods to estimate and remove this noise, to begin with in a random matrix approach and then by inventing the power mapping as an alternative and supplement. These noise reduction techniques have direct applications in portfolio optimization and can greatly reduce risk in stock portfolios.

​An interesting feature of financial correlation is their behavior on short time scales. For relative price changes (or returns) on very short time intervals, the influence of asynchrony in trading and the finite tick size become increasingly important. They are the main statistical causes for the so-called Epps-effect, i.e., for decreasing correlations on short return intervals.

In addition to market risk we also study credit risk. Since an obligor can go bankrupt or default in another way, credits are risky for the banks that issue them. It turns out that the distributions of the losses are highly asymmetric and have long tails. A better quantitative understanding by means of improved models is crucial for banks and regulators, and it is a challenge for statistical physics.