This Virtual #EngagEUrCouncil Think Tank is going to be implemented for the second time already. This time you will be empowered to develop youth ideas for the Portuguese EU Council Presidency that starts in January 2021.

On our Virtual Think Tank, you will find background information on the functioning and structures of EU Council Presidencies and on the different policy areas we are going to deal with. You will also be able to follow the workflow, exchange with other participants, work on your ideas and give feedbacks on the proposals of others.

Upon successful application and in due time before the kick-off of the process, we will provide you with all necessary information on this free (and easy to use) platform. Sessions on our Virtual Think Tank are supplemented by Virtual Labs. The project thus consists of synchronous sessions gathering all participants in video conferences and of asynchronous sessions that provide you the flexibility to work on your own or in working groups.

The Pre-Presidency Conferences (PPCs) are TEPSA’s flagship activity. They take place twice a year in the capital of the country holding the Presidency of the Council of the EU prior to the beginning of its mandate.

The main aim of TEPSA’s Pre-Presidency Conferences is to bring together academics and researchers from the broad TEPSA network, policy-makers, media and civil society in order to discuss the agenda and challenges of the upcoming Council Presidencies. TEPSA Pre-Presidency conferences constitute a major platform for communication and exchange between policy-makers and academia.

Prior to the event, TEPSA researchers formulate recommendations to be presented to high-level officials of the government concerned in a plenary session. The conferences actively involve civil society and media actors, who are able to interact with practitioners and academics. Finally, the insights gained during these conferences and seminars directly feed into future research on the EU and into EU policy making.

Thanks to their genuinely European and transnational nature and to the involvement of civil society, TEPSA’s Pre-Presidency conferences actively contribute to shaping a European public sphere.

More information can be found here.

TEPSA Debate "COVID-19: What do Eastern Partnership countries make out of EU support?"

TEPSA has the pleasure to invite you to the upcoming TEPSA Debate on COVID-19: What do Eastern Partnership countries make out of EU support? this Wednesday 17 June from 10:30 to 12:00 via Zoom.

The debate will feature presentations by the following experts:

Click in the following link to register and attend this TEPSA Debate: https://zoom.us/webinar/register/WN_-uZqqp2hShuQ26caM_emNw

Further information can be found in here.

TEPSA, in cooperation with the Center for Comparative and International Studies (CIS) from ETH Zürich, is organising an online discussion on EU-Swiss relations and Euroscepticism.

Relations between the EU and Switzerland are in limbo, caught between Euroscepticism and pragmatism. Swiss disagreement on the signing of the Institutional Agreement blocks the way forward. At the same time, there is no majority in favour of a rollback of bilateralism. What explains the stalemate and how could it be overcome?

You can find the agenda here.

In several European countries, emergency measures taken in response to the Covid-19 pandemic have triggered questions whether the strengthening of executive powers is proportionate and whether governments do not evade accountability. In Hungary, the government has obtained the power to rule by decree for an indefinite period and a broadly-defined criminal offence has been introduced for spreading “distorted” information in relation to public health measures. In Poland, the government refrained from declaring a state of emergency that would necessitate the postponement of May’s presidential elections; instead it tried to change the electoral law in order to distribute all ballots by post. Also in Turkey, the government has opted not to invoke a state of emergency that the Constitution provides for; instead it has relied on circulars and other low-ranking legal measures that are harder for Parliament and courts to review. The UK government has also been criticized for its reluctance to work with Parliament in the discussion and adoption of measures to combat Covid-19. The large Conservative majority in the House of Commons has inhibited effective Parliamentary scrutiny.

Experts from the TEPSA network will analyse these four cases in an online debate, bringing together constitutional law and political science perspectives. Will “emergency” steps inflict longer-term damage on the division of powers in the four countries? Does the EU play a relevant role in discouraging or correcting breaches to the rule of law? And can these cases still be considered isolated, or are they just the most visible instances of a broader European problem?

The discussion will feature presentations by:

EU Ambassador to the U.S. to speak at UW-Madison

The future of the relationship between the USA and the EU will be the focus of when EU Ambassador to the U.S. Stavros Lambrinidis visits campus on Feb. 17 for a fireside chat with both Jean Monnet Chairs, Professor Nils Ringe and Carl Schurz Visiting Professor Michael Kaeding, “Adapting the EU-U.S. Relationship to New Challenges.” The event, held from 4–5:30 p.m. at the Pyle Center, is free and open to the public. 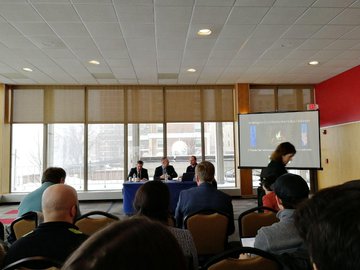 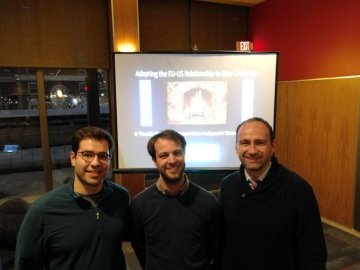 Carl-Schurz Visiting Professor Michael Kaeding and Stefan Haußner give a talk at the Comparative Politics Colloquium on January 30 on „Political equality not without social equality“. The colloquium is from noon to 1:15pm in North Hall Rm 422.

Visiting Carl-Schurz Professor Michael Kaeding (UW-Madison) gives a short and hands-on introduction in front of undergraduate students of the UW-Madison on careers with and within the European Union and the "Brussels Bubble".