Please pick an appointment via this Doodle link for a meeting in my personal ZOOM-Office (no PW required).

​​Make sure to check out E-LiTe (Electronic Linguistic Term Papers), our course-overarching online resource on Moodle, designed to support students in the development of key skills and competencies in academic research and writing needed for independent scientific work in linguistics. Please consult our Linguistics Style Sheet to format your paper correctly.

For general information on Module Ling2 and specific information on term papers, please see this module information sheet (pdf) and make sure to check out this page: http://www.uni-due.de/anglistik/linguistics/academicpapers_and_exams.shtml 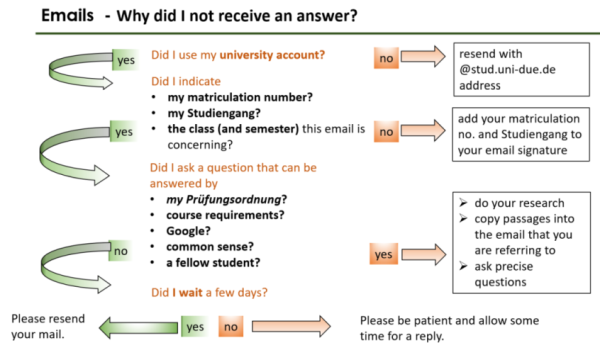 Michael Wentker studied English Linguistics and Dutch Language and Culture at the University of Duisburg-Essen (Germany), from which he graduated with a 2-Fach-Master of Arts degree in 2017.

His master’s thesis is titled "Metapragmatic Negotiations on Facebook – Evidence from Online Discussions in the 2016 U.S. Presidential Election Campaign". It investigates the forms and functions of metapragmatic utterances from an interpersonal pragmatics perspective. In particular, the study analyses how in- and outgroup identities as well as intergroup impoliteness are constructed and negotiated metapragmatically in a semi-public online environment. His thesis was honoured as the best MA thesis in the academic year 2016/17 by the Faculty of Humanities in Essen.

During his time as a student, Michael repeatedly received the UDE-scholarship for highly talented students. Furthermore, he worked as a student assistant in the Department of Anglophone Studies, the Department of Dutch Language and Culture, as well as in an interdisciplinary research project investigating the manifestation of visual multilingualism in the Ruhr area.

Michael is currently working as a lecturer and research assistant at the chair of English Linguistics at the Department of Anglophone Studies at the University of Duisburg-Essen, while pursuing his PhD under the supervision of Prof. Dr Birte Bös. The working title is: “An Audience Perspective on Multimodal Consumer Reviews – Metapragmatic Negotiations of Norms, Identities and Authenticity Online”.