„Pictures at an Election“ 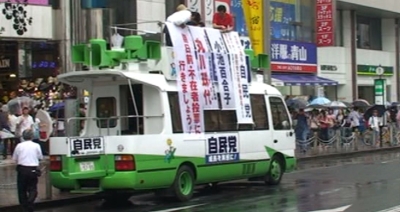 In July 2007, Axel Klein, then senior research fellow at the German Institute for Japanese Studies (Deutsches Institut für Japanstudien, DIJ) in Tokyo, filmed a documentary that covers the campaigns of those candidates who tried to win one of the five seats in Tokyo during the Upper House election in 2007. The documentary shows Japan’s electoral machinery in full steam and focuses on the question of how Japanese candidates try to appeal to voters. The documentary depicts different strategies and techniques, and presents a lively picture of political culture in Japan. In the years since its release in 2008 the documentary has been distributed to more than 100 universities all over the world.

[Forms of Civil Protest in Japan – The Case of Rentai Union vs. Keidanren]日本における市民による反対運動・連帯ユニオン対経団連のケース

In this 20 min. documentary, Axel Klein followed a protest by the small “Rentai [solidarity] Union”, one of the first labor organizations in Japan to represent the interests of unemployed and irregular workers. Using the occasion of Keidanren’s 2009 New Year Reception at the New Otani Hotel in Tokyo, some recently unemployed workers under the leadership of Rentai Union tried to hand over a public letter to the head of Japan’s Business Federation but faced a number of obstacles.

This documentary will be made available on YouTube in spring 2022.