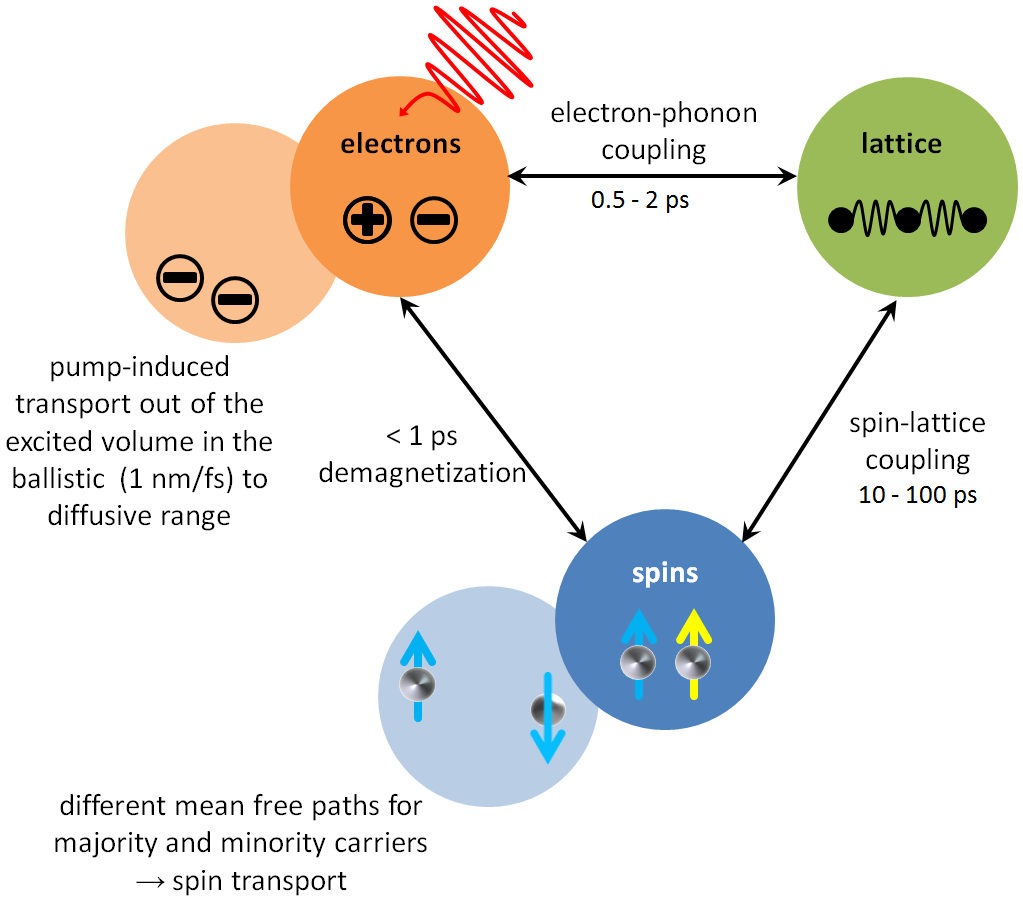 Switching magnetic bits with electrical currents or magnetic fields forms the basis for many applications of magnetic recording and magnetic logic. Manipulating magnetization with ultrashort laser pulses will potentially allow for faster and more energy-efficient ways to read and write magnetic information.
We therefore investigate ultrafast magnetization dynamics in ferromagnetic thin films and layered structures, and at their surfaces and interfaces, after excitation with femtosecond (10-15 s) laser pulses. Our aim is to understand the non-equilibrium dynamics of electrons, their spins, and the lattice in the first tens to hundreds of femtoseconds after laser irradiation. Of particular interest are the microscopic mechanisms that govern ultrafast changes of the ferromagnetic order, such as phonon-mediated spin-flips or femtosecond spin currents. We employ bulk-sensitive linear magneto-optics and surface- and interface-sensitive second harmonic generation as probes in femtosecond time-resolved pump-probe experiments.
We are particularly interested in analyzing femtosecond spin currents across interfaces, and in identifying ways to exploit spin-orbit coupling mediated effects to directly manipulate spins with tunable ultrashort laser pulses. For this, we are currently setting up a non-collinear optical parametric amplifier which will allow for sub-20 fs pulses and variable wavelength.
Funded by the DFG through SPP 1840 “Quantum Dynamics in Tailored Intense Fields”. (www.qutif.de)

X-ray absorption spectroscopy (XAS) at core levels is an element-sensitive local probe of the electronic structure of solids. In addition, x-ray magnetic circular dichroism (XMCD) can be employed to analyze the properties of ferromagnets in a quantitative, element-specific manner, e.g. by separating the spin and orbital contributions to the total magnetic moment or the magnetic moments of different constituents of an alloy.
New sources of ultrashort pulsed x-rays in the femto- and picosecond range, such as free electron lasers, synchrotron femtosecond slicing sources, and high harmonic generation, make it possible to extend these spectroscopic methods to the time domain. We employ XAS and XMCD measured with 100 fs short x-ray pulses as a probe for analyzing the dynamics of correlated materials, heterostructures and ferromagnetic solids after excitation with tunable laser pulses in the visible and near-infrared range. The experiments are currently performed at the Femtoslicing source of the BESSY II synchrotron and electron storage ring in Berlin, while a lab-based x-ray source is in development at the University Duisburg-Essen. For example, we investigate element- or layer-specific magnetization dynamics in ferromagnetic alloys and heterostructures with fs time-resolved XMCD, and employ fs time-resolved XAS to look at the site-specific dynamics of complex materials such as Fe-based high-temperature superconductors.
Funded by the DFG through Sfb 1242 “Non-Equilibrium Dynamics of Condensed Matter in the Time Domain”. (www.uni-due.de/sfb1242/)