In Chemical Vapor Deposition (CVD), the substances that are required for the desired films are introduced into the reactors with so-called precursors. For metallic films, many different organo-metalic substances are used, since their vapor pressures are most often considerably higher than those of the inorganic compounds of the metals. This reduces the needed evaporation temperatures below 150°C. The same substances are also used for the production of nanoparticles from the gas phase in Chemical Vapor Synthesis processes (CVS), thus they are also used by many groups within CeNIDE. However, the vapor pressures of these either solid or liquid compounds are often in the range between 0.1 and 1000 Pa at temperatures between room temperature and 150°C. This is a vapor pressure range which is not investigated routinely. If, however, CVD processes or nanoparticle formation processes shall be up-scaled for industrial processes, the vapor pressure of each compound is an important parameter for the process design.

Even more important for the use of organo-metalic compounds in reproducible systems is the finding that some precursors start to decompose slowly at evaporator temperatures. Thus, the thermal stability of each substance has to be evaluated carefully. Finally, for the design of evaporators the diffusion coefficients of the evaporating compounds are needed, in order to calculate the Sherwood number as a function of the Schmidt number.

These three properties are investigated with gravimetric methods: 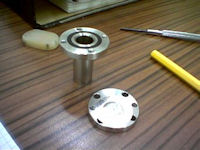 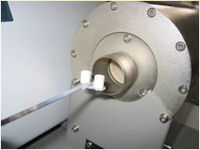