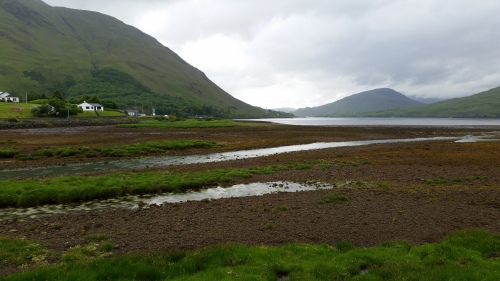 MONDAY, 9 June 2014, marks the beginning of a joyful, educating and, altogether, splendid excursion to Ireland - known as the country of leprechauns, shamrocks and Guinness.

A total of 18 ambitious students and four lecturers were eager to gain first-hand experience of Irish history, culture and language. Under the direction of Prof.Maria Eisenmann and Prof.Raymond Hickey, the group was introduced not only to metropolitan Ireland, but also to the stunning rural areas, which has shown that Ireland is a very diverse country. The two organisers were kindly supported by Margit Hempel and Sarah Steinhoff, who helped make this trip as enjoyable as it was. But then again, the special ingredient of this excursion was that the students were responsible for guiding the group through several stages, sights and themes of this excursion. By means of short presentations in front of historical sights, everybody helped provide the group with useful information on Irish history and culture, e.g. Irish writers, mysteries,traditional and modern Irish music, and the sights themselves, of course. Our destination: Terminal 2 (or Críochfort 2), Dublin Airport. The first major challenge was to get to UCD campus, our residence for the first two nights. After having arrived there, the group set out on their first trip to the city of Dublin to explore a multitude of sights such as Trinity College, Grafton Street, the Bank of Ireland, St. Ann’s Church, the National Museum, and the famous Merrion Square. The task: take a selfie and be creative. The best selfie was rewarded with a pint of Guinness for each of the lucky winners. In the evening, the group was in for a real treat at the Gate Theatre: to witness a thrilling theatre performance of An Ideal Husband by famous Irish writer Oscar Wilde. The play itself focusses on blackmail and corruption in late 19th century London and taught us the somewhat ironic lesson that “to love oneself is the beginning of a lifelong romance.”

TUESDAY started off on the premises of Dublin’s prestigious Trinity College, which was founded in the late 16th century. Our major point of interest was the Book of Kells, the very famous illuminated manuscript, containing the four gospels of the New Testament, which is kept at the library of Trinity College. The library itself, or the “long room”, with its tall and antique bookshelves is worth a visit. After that, our next stops were the National Library, the National Museum and the National Gallery, where we had the chance to delve into Irish history and art. The exhibitions are not limited to either ancient or contemporary exhibits, but provide their visitors with a rather diachronic overview of Irish history. After lunchtime, we took a bus to the coastal area of Dublin. For the first time, we could see Ireland’s spell binding nature: green grass landscapes with hills and little rocks every now and then. The landscape offered us a fantastic view over the Irish Sea, east of Dublin. The prototypical Irish rain during the coastal trip was (thanks to our umbrellas) merely a side issue. Back at the bus stop, we waited for the bus to take us back to Dublin city. The rain had stopped, but the bus did not come. So we decided to walk up a slightly steep hill to get to the nearest bus stop. On the horizon, Prof. Hickey noticed a distant bus-like vehicle and decided it might be best to run for it. A female student challenged him to a combat but lost the trophy to Prof. Road Runner, who ensured a seat on the bus for everybody. The remainder of the day was used in proper Irish style: A pub crawl in Dublin! Who doesn’t like to wet their whistles on a fine Tuesday night with splendid companions and mysterious tales about Irish ghosts?

WEDNESDAY morning, we had to check out from the hostel at UCD. Before taking the train to Galway, our next destination, we still had to tie up some loose ends in Dublin. First, we followed the footsteps of famous Irish writers on our literary sightseeing tour in Dublin, where we learned something about the likes of James Joyce, Jonathan Swift, Oscar Wilde, and Bram Stoker. Next up, we had a guided tour around the Guinness brewery at St. James gate. We learned about the ingredients, the production and the distribution of Guinness, but also had a look at the Guinness advertisement campaign and how Guinness ads have developed from the early days to the present. We all know now that the famous Guinness stork is only allowed to have one, instead of three, bottles in its beak – so drink responsibly! Afterwards, we were kindly invited to either tap our own pint of Guinness or have it tapped by a professional tapster. Three hours and a train journey later, we arrived in Galway, the fourth biggest city in the Republic, as far as population is concerned. We took our luggage to the new residence (Corrib Village), located near the NUI Galway. While walking into the city of Galway at night, we could witness the marvellous sunset, and were lucky to find a superb restaurant where the group sat down to a meal fit for a king.

THURSDAY was a special day, since we had a private coach plus driver, who navigated us through the western, rural area in Ireland – known as Connemara. This is also the area where the Irish language is predominantly spoken today. The Connemara landscape is very diverse: misty hills, beautiful lakes, grassy and rocky grounds, an interesting flora as well as beaches (!). On our journey we made many stopovers, which were perfectly incorporated by our native, Prof. Hickey, for feeding us geographical, cultural and linguistic facts about the region. Apart from that, our highlights were: Irish dancing on a windy – let’s call it stormy – hilltop and “stone-posing” for the cameras in front of a lake leading to a splendid, fairy-tale castle. Moreover, we stopped in a “turf valley” and, at some point, had a magnificent view over the infinite widths of the Atlantic Ocean and could see some scattered Irish islands here and there. Some of our water-loving students (just as Prof. Hickey) couldn’t resist taking a bath in the cool and refreshing sea water. At the end of a busy day, we learned about traditional and modern Irish music and typically Irish instruments and then organised a Fifa 2014 World Cup public viewing event in two of our residence kitchens. 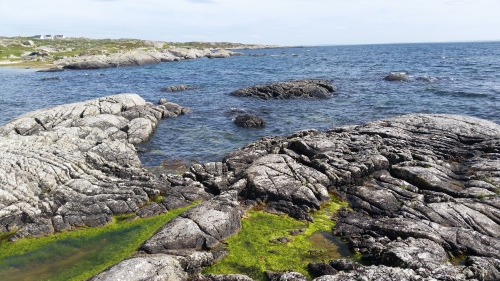 FRIDAY started off with a neat and cosy breakfast with the whole group, after which we had a tour around the town of Galway. Not only did we hear something about the history of the town, but we also had a look at the nice architecture of Galway's houses.To further deepen our knowledge about the harbour town, we went to the Galway city museum, which specifically focuses on maritime art and city history. After having a rewarding amount of free time to explore the city of Galway, the group met again for a delightful final dinner at the famous “King’s Head” pub restaurant. By 9am the next morning, we were all packed and ready to go. At noontime, the major part of the group took a direct coach to Dublin Airport. For them, the Ireland experience ended then. Some people, however, decided to stay a day longer and were later on definitely content with their decision to have done so.

JUST as the country itself, the excursion was utterly diverse. First of all, we learned a fair deal about Irish life, history and culture. On the one hand, we were able to experience a metropolitan city like Dublin, but on the other hand, we also saw a more bucolic city like Galway, which impressed the group due to its Irish charm and its affinity to nature. The students and lecturers got along very well, which is a crucial key ingredient in order for an excursion to become a successful one. All in all, this excursion was very enlightening. Not only was it brought to life by the students’ willingness to entertain the group by means of well-prepared presentations and performances, but also by the outstanding organisational contribution of Prof. Eisenmann and, most notably, Prof. Hickey. In the name of the group, I would like to extend a very warm thank you to everybody who made IRELAND 2014 an unforgettable experience with a lot of craic! 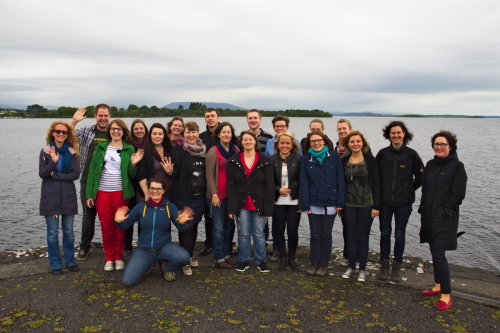