Insubordinate youth and resilient elites: How the second & third liberation movements performed in the recent elections in Namibia and Uganda

The recent elections in Namibia and Uganda are telling indicators for the growing generational tensions between aging paternalistic elites and a youth striving for prosperity and democratic participation in many African states - and they are a wake-up call for more international attention. Many African states achieved their first liberation – the one from colonialism – by armed struggle led by National Liberation Movements (NLM). In some countries, such as Namibia and South Africa, NLMs fought for independence and initiated direct transitions to multi-party democracy. In other cases, the first liberation resulted not in democracy but in dictatorship. Only bringing about new forms of oppression, these non-democratic regimes were again challenged by violent struggles that aimed for a second liberation – this time from homegrown dictators like Idi Amin in Uganda. Regardless of whether they emerged from the first or second liberation, National Liberation Movements like the National Resistance Movement (NRM) in Uganda or the South-West Africa People's Organisation (SWAPO) in Namibia, tend to dominate politics in their respective countries, legitimizing their rule with reference to past deeds. Against the background of prevailing nepotism and blocked development, many countries recently saw the rise of a new generation aiming for a second or, respectively, third liberation – the one that would bring economic growth and prosperity. In the recent presidential elections in Uganda, former liberation hero and long-standing president Museveni was challenged by Robert Kyagulanyi Ssentamu, widely known as Bobi Wine. Similarly, also in Namibia, the former liberation movement and now ruling party SWAPO is challenged by third liberation movements. During the November 2020 Regional Council and Local Authorities Elections there were two movements that competed against SWAPO, the Landless People's Movement (LPM) and the Affirmative Repositioning (AR) movement.

Regional Councils (RC) and Local Authorities (LA) build the second and third governance level in Namibia. Elections to determine the representative in the respective governance bodies were held in November 2020.

On the regional level, SWAPO was thereby challenged not only by the Popular Democratic Movement (PDM – formerly Democratic Turnhalle Alliance) and the SWAPO split-of party Independent Patriots for change (IPC) but also the LPM, a party-turned movement for land reform and social justice. SWAPO suffered heavy losses winning only 88 of the 121 Constituency Councillors which equals a loss of 20 % compared to 2015. SWAPO especially lost its grip on Namibia’s southern and western regions where the majority of votes went to the opposition. 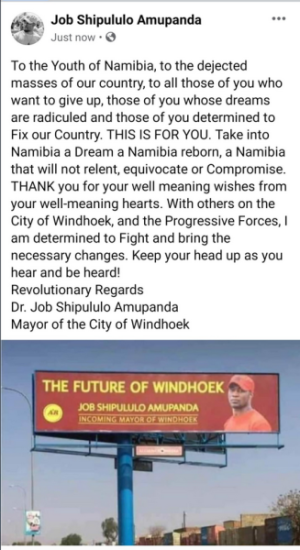 This also effects the national governance level, since delegates from each RC form the National Council (NC), Namibia’s upper house. Due to the RC results, SWAPO will occupy only 28 of the 42 seats in the NC, which represents a loss of 12 seats. With six seats, the LPM enters the NC for the first time and presents the biggest oppositional party.

LA Elections produced a similar picture. While SWAPO still was able to secure a majority of votes (39,90 %), its new contenders IPC (21,73 %) and LPM (13,68 %) performed strong in the West (Erongo) and South (//Kharas and Hardap). The electoral competition was further increased by 12 political associations that competed locally and performed well in cities and bigger towns, including the capital Windhoek. The latter is now ruled by Job Amupanda, leader of the AR movement.

Thus, although SWAPO continues to dominate the political landscape – especially on the national level – it is more and more challenged from below and mostly locally by third liberation movements aiming to improve service delivery and prosperity.

In July 2018 Uganda’s Constitutional Court cleared the path for the then 73 years old Museveni to run for office for the sixth time – and possibly for lifetime since the presidential term was increased from 5 to 7 years. Prior, in 2005, the Ugandan Parliament had removed the presidential term limit. Museveni took office after toppling Idi Amin (1979) and Milton Obote (1985) with the help of the National Resistance Army (NRA) – a typical second liberation movement - in 1986.

In the January 2021 presidential elections, Museveni was challenged by Robert Kyagulanyi Ssentamu, widely known as Bobi Wine. Wine started his career as local rapper and became famous under the name Ghetto President – a reference to his origin, the slum of Kampala. Wine became leader of the People Power, Our Power movement and an icon of resistance to a new generation of Ugandans, opposed to the aging Museveni and exposed to excessive regime repression. He got repeatedly arrested and – due to several attacks during his campaign – campaigned in a bulletproof west.

The pre-election times were marked by government repressions and widespread violence. In November more than 50 people were killed during violent protests following an arrest of Bobi Wine for disregarding COVID-19 regulations during his campaign.

The elections were held under a nationwide internet shutdown and without presence of external observers and with the oppositional candidate under “house arrest”.

Twitter posts by UN Special Rapporteur on the Rights to Freedom of Peaceful Assembly and of Association, Clément Nyaletsossi Voule, and Ugandan opposition leader Bobi Wine, 13 and 15 January 2021, respectively
​​

The United States withdrew its observers after, according to a statement of Ambassador Natalie E. Brown, the Electoral Commission of Uganda denied 75 % of its election observers the accreditation, making a serious observation of the elections impossible. Similarly, the EU did not send an election observer mission since Uganda did not implement any of the 30 recommendations made by the previous observer team.

On 16 January, the Electoral Commission of Uganda declared Museveni  winner of the presidential elections. With overall 58 % percent of the votes Museveni is said to have secured an absolute majority against his rival Wine, who received 34 % of the votes. Wine claimed election fraud and announced to publish proofs for his claims once the internet ban is lifted. Without external elections observers present and many allegations of electoral fraud, it is hard to tell how fair the elections really were.

Recent elections in Uganda, Namibia, South Africa and elsewhere show that the electoral support of National Liberation Movements in power is slowly decreasing. A growing part of Africa’s young societies is no longer willing to accept the past deeds of having liberated the country from colonialism or dictatorship as legitimization for nepotism and failures to provide services and development. Instead, the support for second/third liberation movements is rising.

Nevertheless, although being challenged successfully by these young movements at the local level, first generation/second National Liberation Movements in Uganda, Namibia, South Africa and elsewhere on the continent have proven to be extremely resilient on the national level. The example of Uganda further shows that attempts to challenge the dominance of former National Liberation Movements need outside support in form of election observation and foreign pressure to stick to democratic procedures and political rights.

Against this background, the EU’s decision not to send election observers to Uganda – a country which had previously shown unwillingness to implement the comments of election observers and which was facing a foreseeable competitive election – is at least questionable.