Since the discovery of Archaea as a domain of life, separate from Bacteria and Eukarya (Woese and Fox 1977, PNAS 74, 5088-90), Archaea have not only served to study adaptation processes to extreme growth conditions, but have been instrumental as a third, comparative lineage to study the evolution and characteristics of central cellular functions. Initially it was assumed that Archaea are adapted to extreme habitats characterized by high temperature (e.g. thermophiles, hyperthermophiles), extreme pH-values (acidophiles), high salinity (halophiles) or that they harbor specific metabolic capacities, like methane formation (methanogens). However, studies using molecular probes (DeLong 1998, Curr. Opin. Genet. Dev. 8, 207-10) indicate that Archaea are abundant in all ecosystems from soil to ocean, and thus play an important role in the biogeochemical cycle.

The study of Archaea has revealed several unique metabolic features, many of which differ from the bacterial or eukaryal counterparts. Especially in the central carbohydrate metabolism, Archaea feature a great metabolic diversity with many unusual “new” enzymes and pathways. Strikingly, factors involved in cellular information processing (transcription, translation, replication, DNA repair) are highly homologous to the eukaryal equivalents. The archaeal system therefore represents an alternative and often simpler model to study the more complex processes that occur in the eukaryal nucleus.

Hyperthermophiles, organisms with optimal growth above 80°C, have gained the special interest of many scientists due to their fascinating extreme lifestyle as well as due to specific experimental advantages of hyperthermophilic proteins (e.g. higher rigidity, ease of crystallization, simple purification procedures after recombinant expression in mesophilic hosts). This interest is further fueled by the great potential of hyperthermophiles and their proteins in biotechnological/industrial applications. With reference to applied aspects, a useful feature of “extremophiles” and “extremozymes” is that these organisms as well as their enzymes are often tolerant to acid, organic solvents and/or high temperature. 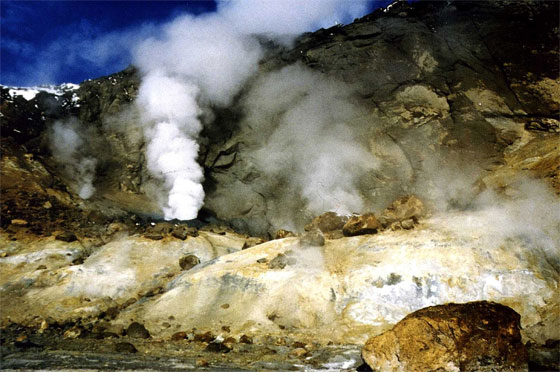 Hot springs “solfataras” Kverkjökull (summit of the glacier), Iceland, 1992 (Photo by B. Siebers).

In the era of genome sequencing one of the major future challenges is to unravel the function of numerous hypothetical genes (20-40% of genes) that encode proteins of unknown function. In my working group we focus on the central carbohydrate metabolism (CCM) in (hyper)thermophilic Archaea, the third domain of life. Archaea are unique in regard to the combination of bacterial (e.g. genome organisation, complexity of metabolism), eukaryotic (e.g. information processing) and specific archaeal (e.g. biomembrane, novel metabolic pathways and enzymes) features. As a consequence of their extreme habitats (temperatures above 80°C) (hyper)thermophiles are ideal model organism to study adaptation strategies as well as the response to changing environmental conditions (e.g. stress response).

In addition to, unravelling the complexity of metabolism and the reconstruction of metabolic pathways one major focus of our work is the regulation at the gene and protein levels. The aim is to achieve a holistic understanding by the combination of classical biochemical and genetic methods with modern high-throughput technologies (i.e. genomics, transcriptomics, proteomics, metabolomics) and modelling (systems biology).

An additional central focus of our research is the cellular response to environmental changes (e.g. stress response). This aspect is addressed in our studies on the role of trehalose as a compatible solute in Archaea and the function of multiple general transcription factors for differential transcription as well as reversible protein phosphorylation in dependence of different growth and stress conditions.

In particular, we also aim to transfer our knowledge from basic research into biotechnological applications by the application of enzymes (biocatalysts), enzyme cascades or metabolic engineering for the design of novel products, production paths and production strains. The aim is to utilize renewable biomass for the sustainable eco-efficient production.