The cultivation of khat is an increasingly politicised topic in Kenya, affecting trade, foreign affairs and local politics. Khat, referred to as miraa in Kenya, is a stimulant drug harvested from the flowering khat (or Qat) plant. Khat cultivation and consumption has a long-lasting tradition in the Horn of Africa and Arabian Peninsula region but has also seen an increase in consumption in Kenya, especially among the nation’s younger urban population.

Only recently, Somalia, the largest importer of Kenyan khat, ended a ban on khat imports from Kenya. The conflict between the two countries dates back to 2016, when then Meru County governor Peter Munya travelled to Somaliland, hoping to tap a new market for Kenyan khat traders in return for recognising Somaliland. For now, the conflict seems to be solved at the diplomatic level. The effects of such diplomatic turmoil are, however, most significantly felt by the many khat producing farmers.

It is mainly the significant positive effect on poverty reduction among low-income smallholder farmers, but also the importance for the national economy, that creates a large dilemma for policy makers from a development perspective. Long-term khat consumption can have severe effects on the mental health of its consumers, creates dependencies and negative long-term health consequences (Odenwald et al. 2010). Modern and faster logistics in the khat market increase those issues, since khat is most potent 48 hours after harvest. The socio-economic costs should therefore not be overlooked.

But it is precisely this point where the discussion becomes a dilemma. Policy makers have to weigh between the negative effects on the consumers and the poverty lifting effect on the smallholder farmers as well as the social and cultural significance of khat, most notably in Ethiopia, Somalia and Yemen.

The livelihood strategies of smallholder farmers in the Mount Kenya region are under increasing pressure. Climate change and a growing variability in seasonal rainfall patterns, degradation of resources and extreme land constraints pose challenges to the profitability of agriculture and the livelihoods of the rural population. Demography, domestic migration, stratification in landholdings and most notably the heritage system, lead to a fragmentation of landholdings. Especially in the higher parts of the region, that are characterized by favourable agricultural conditions, landholdings rarely exceed 2 acres (0.8ha) among the poorer households. Within this group, landholdings go as low as 0.25 acres.

In order to combat land constraints, farmers living below the regions’ tea zone, are required to change their traditional maize-oriented farming strategy towards space-saving, high-profit activities. Diversification and increased engagement in vegetable production as well as zero-grazing livestock keeping are strongly favoured by non-governmental development organisations and donor initiatives in the region, while government agencies promote and subsidise modern inputs in maize farming. All of these strategies, however, require a certain investment capital, often exceeding smallholder farmer capacity. Furthermore, maize produced beyond subsistence needs on small plots, rarely provides enough income to cover consumption needs, school-fees or health bills of the household. Due to those circumstances, khat has spread in the region, most recently in Embu county.

While Meru County has been known for several decades for its khat cultivation, Embu County has seen a ‘rush on miraa’ in recent years. Driven by market incentives and visible economic success by participating farmers, khat cultivation has spread through rural communities, starting from lower parts of Embu County, up until just below the tea zone, without any incentives given by governmental or non-governmental institutions.

From a smallholder perspective, khat cultivation, a permanent crop, is a high-profit, space-saving strategy to obtain a regular income with minimal investment costs. While khat does require water for its growth and to increase the harvest, it is drought-resistant and thus less affected by irregular weather patterns. The muguka strain, which is predominant in Embu County, can be harvested every 7-10 days and thus provides a regular income to the household. Nonetheless, the vast majority of smallholders in Embu County devote only a fraction of their land to khat production in order to uphold subsistence farming.

The subsistence production coupled with regular income from khat cultivation leads to a significant increase in food security and improved nutrition. Since khat cultivation exceeds the returns of any other fruit or food crop (Tefera 2009), its impact on poverty reduction is significant and reduces vulnerability in times of internal or external shocks to the household. Households with larger landholdings and households willing to engage stronger (in terms of allocated land) in khat cultivation have the potential to lift themselves out of poverty and use the income for farm development. 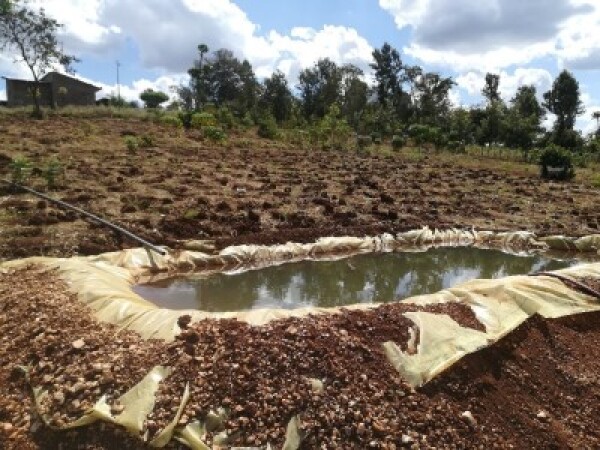 Since the khat business promises large returns, many traders operate in rural Embu and purchase the product directly at the farm gate or at small markets in the communities. While the negotiation power of smallholder farmers is often seen as an issue in food crop and fruit cultivation, the competition between khat brokers leads to a rise in negotiation power of the farmers. Brokers transport the product to rural centres from where it is repackaged and transported to urban wholesale markets in Nairobi and Mombasa.

Beyond the household and local perspective, khat cultivation also positively impacts the region’s and nation’s export performance. In terms of value, khat is the most important horticultural product, outperforming exports of fruit, vegetable and flowers.

A ban of khat cultivation, trade and consumption would have drastic effects on the livelihoods of farmers and increase poverty and food insecurity, while likely fuelling migration to urban centres for a lack of income opportunities for the rural youth. It is therefore necessary to tackle both issues with caution. On the one hand, the negative effects of khat on the consumers has for too long been underestimated (Odenwald et al. 2010). Governments and multilateral health organizations need to become active to reduce harm for consumers and introduce preventive measures and information campaigns specifically targeting the youth and pregnant women. At the same time, it is crucial to include farmers in local fruit and vegetable value chains and implement water schemes in the Mount Kenya region to offer alternatives to khat cultivation.  Further investments in rural industries can create income opportunities for the well-educated youth and thus, reduce the dependency on primary agricultural activities which in the best case would lead to a reduction of land fragmentation. A revival of the coffee sector in the coffee belt of the region would allow farmers to reengage in a less harmful cash-crop. Regulatory policies and poor performance of the coffee cooperatives have led to a crash of coffee cultivation in the region for smallholder farmers and many have uprooted coffee in favour for the less input-intensive and more profitable khat cultivation.

The commodity chain of khat with its multiple actors, as well as the underlying power relations and potential political effects in the countries along the commodity chain, have so far drawn little attention from scholars and an understanding of their interaction requires further research.

Odenwald, Michael/Warfa, Nasir/Bhui, Kamaldeep/Elbert, Thomas (2010). The stimulant khat--another door in the wall? A call for overcoming the barriers. Journal of Ethnopharmacology 132 (3), 615–619.