Bismuth Ferrite (BFO) Nanoparticles (NPs) not only display multiferroic properties at room temperature (RT) but they are also good visible light absorbers with a narrow band gap of 2.18 eV. BFO is also known for its large spontaneous ferroelectric polarization at RT yielding a large pyroelectric coefficient. All these properties together can be utilized in photocatalysis, photovoltaics and data storage.

Ms. Astita Dubey has explored the Bi site cation doping effect on BiFe0.95Mn0.05O3 NPs. An enhanced photocatalytic efficiency for the degradation of organic dyes in water was achieved via tuning the band gap, increased surface area of NPs and exploiting ferroelectric behavior.

More details can be found on the poster in the university building V15 S05 next to V15S05D08. For online view, you can visit on this website https://www.materialsbydesign.org/student-postdoc-award-winners-2021.

We all warmly congratulate Ms. Astita Dubey on the award and best wishes for her research! 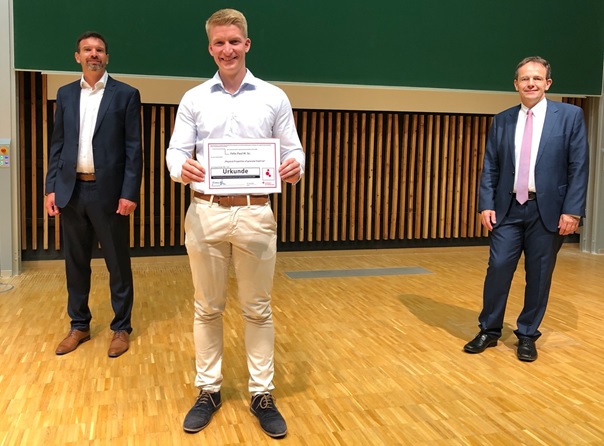 Since the start of this year the Deutsche Forschungsgemeinschaft has been funding the Priority Program SPP 2196, Perovskite semiconductors: From fundamental properties to devices. It addresses the investigation of the new class of solar light absorber materials which promise a solar cell type of much reduced production and energy cost. The programme focuses on the fundamental working mechanisms of the perovskite materials, in particular structural, optical, electronic, and magnetic properties and, most importantly, their correlations. The consortium consists of 21 projects and unites about 100 researchers throughout the country.

Our institute takes part in the SPP with the project “Dielectric Effects in Hybrid Perovskites: Impact on Charge Carriers and Anisotropy” jointly with Prof. Niels Benson (Institute of Technology for Nanostructures, UDE). The aim of this project is to understand the underlying transport and screening mechanisms of the hybrid perovskite absorber materials using ferroelectric and dielectric studies as well as selective transport property testing.

The kick-off meeting took place in Potsdam on 12th-13th of March 2020 and marked the beginning of the Priority Programme with many fruitful discussions about future work and collaborations between the different groups. General information on the program can be found here (https://www.perovskite-spp.uni-konstanz.de/spp-2196/). A first glance at the research that will be conducted at the University of Duisburg-Essen is given here (http://onlinelibrary.wiley.com/doi/10.1002/aenm.201700600/abstract; https://aip.scitation.org/doi/10.1063/1.5090947). 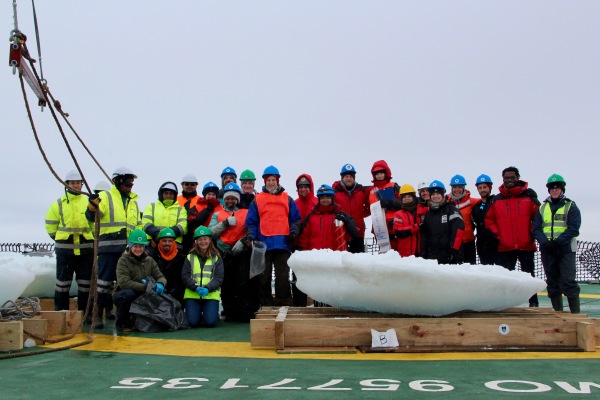 In the last years power conversion efficiencies in solar cells with perovskite absorbers have reached up to 23 %. To broaden the field of absorber materials, ferroelectric relaxors are in the focus of this research. The ferroelectric layer provides a polarization-induced internal electric field which can help in separating the photo-excited carriers. The photovoltage is not limited to the band gap of the material. These properties could lead to an optimized device with a better performance.

At the 2019 IEEE ISAF-ICE-EMF-IWPM-PFM Joint Conference in Lausanne, Switzerland, our research scholar Astita Dubey received the diploma of finalist of best student paper award for her contribution ‘Tuning Optical, Structural and Multiferroic Properties of Bismuth Ferrite (BiFeO3) Nanoparticles by co-doping with Ba and Mn’.

Bismuth Ferrite (BFO) Nanoparticles are single phase multiferroic materials exhibit magnetoelectric properties at room temperature with a narrow band gap 2.18 eV. Due to these features it can potentially be utilized in the avenues of data storage, sensors and photo catalysts.

For more details, the poster hangs in the showcase in V15 S05, University building V15.

We congratulate Ms. Astita Dubey on her achievement and best wishes for her upcoming research!

Prof. Qiming Zhang is hosted by Professor Doru C. Lupascu at the Institute for Materials Science of the University of Duisburg-Essen.

Dr. Maryam Khazaee has successfully completed her PhD-thesis on “Materials for Halide-Based Thin Film Solar Cells”. During her thesis Dr. Khazaee has shown that a number of Silver-Bismuth-Iodide composites can serve as solar cell absorbers. In particular she has shown that vapor deposition techniques allow to prepare dense and effective solar cell absorber layers. Presently, the search for replacement of the toxic Lead in the so successful Methylammonium Lead Halides perovskite solar cell absorbers drives the research in other compounds of the halides that can potentially be less toxic and better withstand the commonly encountered fast deterioration of cell performance in this material family.

Mai 2017 Why are perovskite solar cell materials so good?

Many different types of solar cells have been devised in the last decades. The fastest development so far has been observed with the perovskite solar cell absorbers. Within a few years, power conversion efficiencies have gone up to 22% for a single cell. Lifetimes up to one year have been confirmed.

One of the most puzzling effects in these material is the low impact of defects on electron transport. Apparently, the number of defects can be a multitude of those permitted in classical semiconductors and electron mobility remains practically unaffected.

In a paper just published in Advanced Energy Materials, we have been able to explain this unusual behavior by dielectric effects. A particular mechanism of charge screening appears to be the fundamental reason why these materials behave so exceptionally good.

This thesis was funded by the European Union in the Initial Training Network (ITN)       NANOMOTION contract number FP7-People-2011-ITN-290158.

The Institute for Materials Science at UDE coordinates the solid state activity at ISOLDE via the project EkoMarl.

*The On-Line Isotope Mass Separator, also known as the ISOLDE Radioactive Ion Beam Facility, is a facility located at CERN on the PS Booster. It started operating in 1967 and was rebuilt twice with major upgrades in 1974 and 1992.

ISOLDE (Isotope Separator On Line DEtector) is dedicated to producing radioactive nuclei for a number of applications covering nuclear, atomic, molecular and solid-state physics, but also biophysics and astrophysics. The large variety of available species allows the systematic study of atomic and nuclear properties and exotic decays far from the line of stability. As of 2006, more than 60 physics experiments are active there.

Radioactive nuclei are produced at ISOLDE by impinging a high energy beam of protons on a stationary target. There are a number of target materials depending on the desired final species. Collisions between the proton beam and the target produce a variety of fragments, which are extracted from a very hot target as a vapor, which is then selectively ionized by, e.g., laser ion sources, accelerated to low 60keV energy and finally, magnetically mass separated to yield the desired element/isotope. The time required (few ms) for extraction places a lower limit on the half-life of isotopes which can be produced by this method. Once extracted, the isotopes are collected to be used off-line or directed either to one of several detector on-line stations. Alternatively, mainly for nuclear physics purposes, the isotopes can be then accelerated at the new High-ISOLDE accelerator complex to attain higher energies (several MeV/nucleon).

The facility is operated by the ISOLDE Collaboration comprising CERN and 9 European countries.

Further information on the work at ISOLDE can be found here.